Chris Birkinshaw is an assistant curator in the Missouri Botanical Garden’s Madagascar Program, based in Antananarivo. He describes his observations on forest succession at Ankafobe, a site in the central highlands.

Anyone flying over Madagascar’s highly dissected central highlands will be struck at first by the vast grasslands that dominate this landscape.  But, those looking more carefully will also detect pockets of forest within the rich network of valleys.  These forests have a distinct fauna and flora but, perhaps because of their small size, they have attracted little interest from conservationists.  Consequently, in the last few decades, the majority have been degraded or entirely destroyed as their trees were cut for timber or charcoal and the relicts burnt by wild fires that rage over this landscape in the dry season.

The Ankafobe Forest, located some 135 km NW of Antananarivo, is currently being designated as new protected area by Missouri Botanical Garden’s Madagascar Research and Conservation Program.  It is one of the larger remaining areas of highland forest but, here too, the forest has been impacted by exploitation for timber and charcoal and burning by wild fires.

Efforts are underway to restore this forest to its former extent in the recent past.  This is no easy task because away from the current forest edge tree seedlings are subjected to harsh conditions: soils impoverished and compacted by annual burning, grasses that compete greedily for water and nutrients, an extended 7-month long dry season, and exposure to hot sunshine and strong desiccating winds.  Even when firebreaks are used to prevent wildfires from penetrating the grassland surrounding the forest, few tree seedlings naturally colonize outside of nurturing limits to the forest.

Few but not none.  A closer inspection of the landscape reveals some woody plants in the grassland on the less sunny south-facing slopes surrounding the forest (south is less sunny because Madagascar is in the southern hemisphere). Perhaps then the forest could be helped to expand by planting young trees preferentially on these slopes? 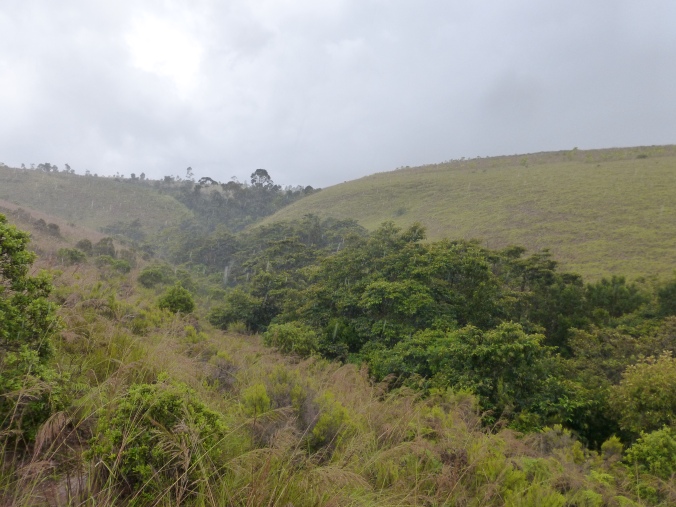 To test this idea in 2017 we planted 25 nine-month old seedlings of each of four native tree species in grassland 20 m from the forest edge on both a south-facing slope and a north-facing slope.  The species were selected for this test are native to the Ankafobe Forest and were available at the local tree nursery when the experiment was installed.  After 12 months the survival and growth of these young plants were measured.

Aspect – the direction that a slope faces – makes a big difference for vegetation in the temperate zone, especially in dry places. But it is not often considered in tropical ecology. Directly or indirectly, the difference in sun exposure between the slopes at Ankafobe can make the difference between life and death for young trees growing in this hostile, water-stressed environment.

To read more blog posts about the restoration efforts at Ankafobe, please click here. You may also read a 2019 open access paper about seedling trials at this site here.