Green Again Madagascar is a young non-profit aiming to reconnect rain forests in eastern Madagascar and collecting heaps of data in the process. Disclosure: Leighton Reid wrote this blog and is on Green Again’s board of directors.

Matt Hill is trying to restore a rainforest corridor across eastern Madagascar. His motivation is that Madagascar’s wet, eastern flank was once blanketed by a dark, rich forest festooned by bizarre plants and teeming with unique animals. No longer. Over the last 70 years humans cleared almost half of what was there in the 1950s – mostly for farming. Although the farming is often temporary, the forest rarely grows back. Weedy ferns and exotic trees find their way onto the abandoned farms and take hold – boxing out the Malagasy species.

Some tropical rain forests can recover swiftly on their own, but not these. Eastern Madagascar is a strong candidate for hands-on ecological restoration.

Madagascar (left) and the region of eastern Madagascar where Green Again Madagascar operates (right). Dark green areas are intact rain forest. Colored ovals show the expanding project scope of Green Again over the past four years. Green Again hopes to one day reforest a longer corridor across the northeastern side of the island. Imagery is from Google Earth. 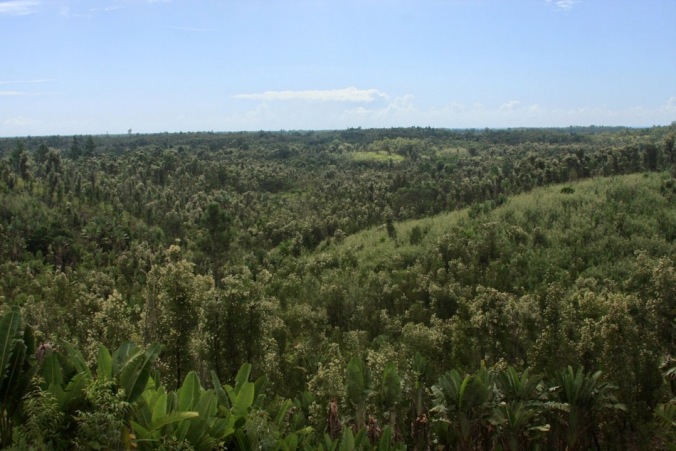 In the landscape around Foulpointe, native forest was replaced by shifting agriculture, which was replaced by a forest of invasive Melaleuca quinquenervia, a tree native to Australia. Photo by L. Reid.

Matt is a middle-aged ex-pat and a self-described “quant”. His father was a math professor, and Matt followed in his footsteps, earning a degree in mathematics from the University of Chicago and subsequently a masters from UCLA. Before landing in Madagascar, Matt had a career on Wall Street analyzing large databases for Putnam. He retired early seeking a simpler and more natural lifestyle, which he found in abundance in rural northeastern Madagascar.

I first met Matt in 2015 at Parc Ivoloina – a zoo and forestry station near the port city of Toamasina. Clad in gym shorts and flip flops, Matt was buzzing between nursery beds shaded with bamboo slats and a laptop powered by a portable solar panel, where a local was entering data about tree survival and growth. Matt explained his tree planting system to me. At each stage, from seed to tree, he and his team measure plant performance – including survival, height, and diameter. Matt’s team uses these data to quickly adopt methods that work and discard methods that don’t.

As he explained his tree planting system to me, I was impressed by Matt’s attention to rigorous data collection – a preadaptation from his Wall Street career that serves him well in his new pursuit of tropical forest restoration.

Matt was introduced to forest restoration by accident when he was stranded for several days in Toamasina waiting for the wild, muddy road to Maroantsetra to become passable. He visited Parc Ivoloina on a whim and learned about a recent wildfire. A local man had been making charcoal when his fire got out of hand and burned his own farm and 20 acres of a nearby forest. The experience moved Matt to begin growing and planting native trees on the burned land. This effort congealed into an NGO called Green Again Madagascar.

From the start, Green Again has been a collaborative effort involving a team of local people. Jean François Solofo Niaina Fidy is the head forester at Parc Ivoloina and president of a nearby village association. He initially advised Matt on the project and helped build local support. Many community members joined the restoration effort – growing trees in the nursery and planting them in the burned area. It is a steep learning curve. Many local people have only a few years of school and may not have held a pencil for some time. Matt teaches them to use GPS units, record data on datasheets, and enter it into an Excel spreadsheet. When the data do not make sense, they return to the field to take repeated measurements.

The work is hard but good by local standards. Many locals make their living by breaking large boulders into gravel by hand, with a hammer. Others spend their days shoveling sand from the river into dugout canoes and paddling it to shore where it is picked up by road construction trucks. In contrast, locals who get involved in these forest restoration projects pick up transferable skills in horticulture, computing, and business management.

Coping with wildfire (and learning from it)

In early November 2016, Matt called me in a panic. There was a wildfire. His plantings had burnt to a crisp.

Fires are common in eastern Madagascar, but this was a tragedy. To make a bad situation worse, the plantings that burned were an experiment that Matt was doing for a master’s thesis at the University of Minnesota.

A wildfire in 2016 that swept through a forest restoration site, destroying Matt’s master’s thesis experiment.

In the ashes of his ruined experiment, Matt found a few survivors. He discovered that some native trees are resistant to fire. These survivors may lose their leaves and stem to fire, but they can resprout from roots.

Importantly, Matt also learned that trees planted near the edge of plantings were more vulnerable to fire than trees planted in the center of a plantation. This is because the landscape outside of the tree plantations was more flammable than the trees inside the plantations. In particular, the thatch from a common fern (Dicranopteris linearis) would catch fire and burn for quite a long time.

For good measure, Matt’s team also includes some “vulnerable” tree plantings using the earlier techniques so that the next time a fire sweeps through one of the sites, Green Again will have tangible evidence about which strategy is the most fire-proof. 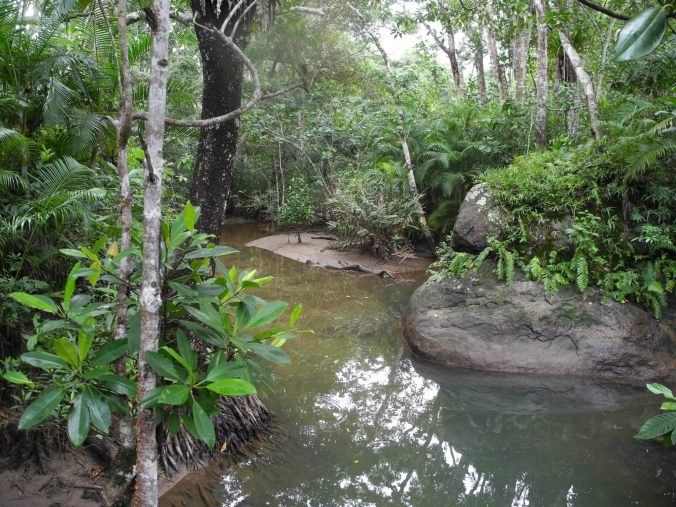 A pristine rainforest in eastern Madagascar.

Photos: All photos are by Matt Hill unless otherwise noted.