Andres Santana is the graduate program coordinator at the Organization for Tropical Studies. During a recent fieldtrip in southern Costa Rica, he and CCSD restoration ecologist Leighton Reid compared notes on using fig stakes for ecological restoration.

Tropical beaches are many things to many people. To plants, beaches are hot, sandy, and salty – complicating their restoration.

Costa Rica has 1228 km (763 mi) of coast line – including 1016 km on the Pacific side and 212 km on the Caribbean. Along Costa Rica’s northern Pacific coast, the beach forms the natural edge of the dry forest. Farther south the adjacent forest is more humid. Giant trees, 40 m or more in height, grow right up to the high tide mark, particularly along the Caribbean.

But as with so many tropical ecosystems, Costa Rica’s coastal forests have been subject to human impacts. Many shoreline forests were cleared for cattle ranching, and exotic grasses were introduced as forage. Some of these grasses are fierce competitors and prevent tree seedlings from establishing, even long after the pastures have been abandoned.

In 2009, a small non-profit organization, Costas Verdes, was formed to restore coastal forests along degraded shorelines, particularly wildlife refuges. The restoration work was initially challenging; tree seedlings were hard to establish along the coast because of the harsh environment – high temperatures and salinity and lack of freshwater were among the most significant obstacles. Not to mention the invasive cattle forage grasses. 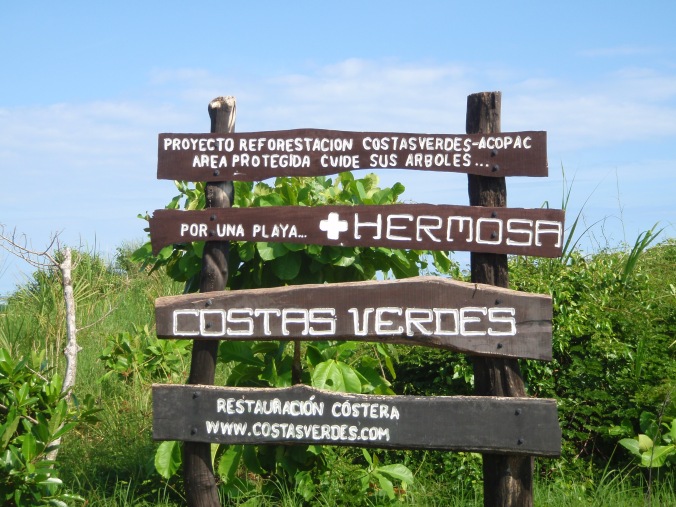 Playa Hermosa, a surfing destination on the Central Pacific coast, was among the most heavily deforested project sites. This area, part of a wetland and river estuary, was declared a national wildlife refuge in 1998. By 2009, very little forest had naturally regenerated. This led Costas Verdes to implement a restoration project at this beach. Planting plots were established where invasive grass was removed. In other areas, grasses left intact, as a comparison. It quickly became evident that tree seedlings were outcompeted by the grass. Those in the cleared plots grew better, but they still faced the other coastal habitat challenges.

Some native trees are resistant to hot substrates and high salinity, but these species were not available in tree nurseries, most of which focused on ornamental species. This meant that seedlings needed to come from locally collected and germinated seeds. We realized that this would take time to get going. Tree seedlings under 50 cm rarely survive, even if they have the proper coastal adaptations.

To accelerate the restoration, we decided to use tree cuttings rather than growing seedlings from seed. A colleague suggested Ficus goldmannii as a candidate species, so in 2011 we conducted a planting trial. We planted 225 2-m long cuttings. Of these, 195 (87%) survived their first year. By the second year all 195 survivors had become established and were quickly providing canopy cover and lowering the temperature of the sand.

An established fig stake with a dense canopy. Note the weak, patchy grass below it.

Once fig stakes created some canopy cover, we brought in other tree species – mostly from the coastal tree nursery that we created. Shade from the fig canopy also began to inhibit the invasive grasses, which require high sunlight to photosynthesize efficiently. Reduced competition with these grasses allowed other tree seedling species to survive.

In this instance Ficus cuttings turned out to be useful in promoting restoration. We have since used cuttings for other plots with similar success.