James and Thibaud Aronson post the first of four blogposts on their recent trip to Namibia and South Africa.

For the last trip for our book project on desert trees and restoration in arid regions, we started in Namibia, the only country in the world named after its desert! The Namib desert covers the entire coast of Namibia; it is more than 1500 km long and up to 200 km wide and extends north into Angola and south to South Africa. It is often said to be the oldest desert of the world, estimated by some to have continuously experienced arid or semi-arid conditions for the last 55- 80 million years. Certainly there is good evidence that it has been dry since the mid Miocene (11-16 million years ago). (The Atacama desert, from which we wrote last October, is also very old.  For comparison, the Sahara is less than than 7 million years old, and has experienced several much wetter periods since, some as recent as 10,000 years ago. 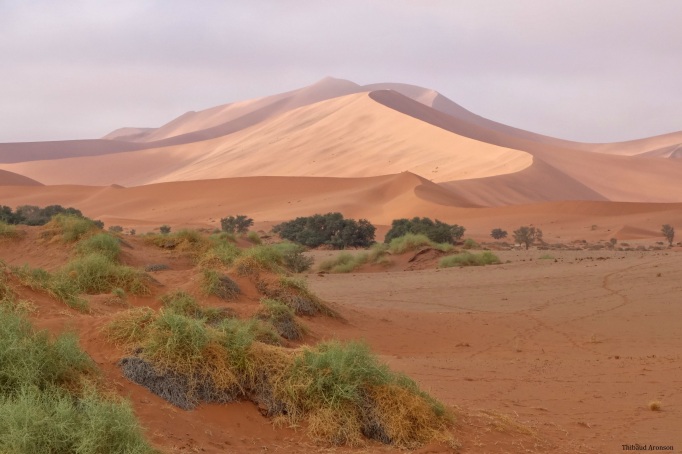 Some of the highest dunes in Africa are found at Sossusvlei, in central Namibia. The highest one, ‘Big Daddy’, is just a bit taller than the Eiffel Tower, reaching 325 meters.

The Namib is an exceptionally dry part of the Earth, with the coastal sections hardly receiving any rainfall at all. It does however receive coastal fogs, often for more than 100 days per year, which provide a significant source of moisture. Furthermore, the desert is traversed by 12 ephemeral rivers, which form striking linear oases, with lush riparian canopies. These canopies are dominated in most cases by very large Faidherbia albida trees, that remarkable tree known, among many other names, as Ana tree in southern Africa, and Gao in the Sahel. 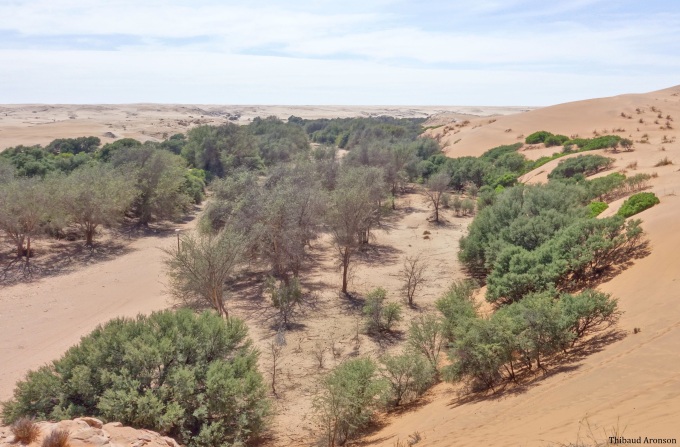 Ana trees along the bed of the ephemeral Kuiseb river, central Namibia.

This tree – which until recently was classified as an Acacia, often shows a very unusual ‘reverse’ phenology compared to most woody plants in seasonally dry areas, as it keeps its leaves during the dry season and drops them in the wet season, when all the other deciduous trees and shrubs are growing new ones. Furthermore, its leaves as well as its pods – which it produces in copious numbers – are highly palatable to animals and high in protein. It is therefore an essential resource both for wild browsers and livestock. And there’s the shade it provides as well, which is a hugely important feature in all desert landscapes. In fact, Ana is one of the most important trees for herders throughout the continent, and is one of the few trees they deem more useful to them standing than cut down. As for the wildlife, these riparian canopies and the food they provide are very important. In fact, they enable some large mammal species, such as the kudu (Tragelaphus strepsiceros), and even rhinoceros and giraffe in the northern Namib, to range into a desert otherwise too harsh to support them.

A springbok (Antidorcas marsupialis) in the shade of giant Ana trees on the banks of the Kuiseb River. This animal is well-known for its pronking behavior: individuals like this can jump up to two meters straight into the air as a display of fitness to discourage predators from giving chase.

Unusual among deserts, and likely because of its age, the Namib is home to a large number of endemic animal species, mainly beetles, reptiles – such as the Wedge-snouted Sand Lizard (Meroles cuneirostris), and birds, including the Dune Lark (Calendulauda erythrochlamys), Namibia’s only endemic bird.

The Wedge-snouted Sand Lizard. The shape of its nose is not just a funny accident of evolution: it actually allows this lizard to ‘dive’ into the sand to escape its predators. This lizard is also known to perform a ‘thermal dance’, lifting one foot at a time, or lie on its stomach with all four feet in the air, to reduce its contact with the sand that can reach a scorching 70 degrees C (158 F)!

A Dune Lark, in the Namib-Rand Nature Reserve, in the process of building its nest in a hummock of grass. Its name is misleading; this bird actually prefers to live in the swale of vegetated dunes where its cryptic coloring makes it seemingly vanish as soon as you blink.

However, the Namib’s most famous endemic is undoubtedly Namibia’s national plant, the bizarre Welwitschia mirabilis. This is the sole species of the one genus in the venerable – dare we say inimitable? – Welwitschiaceae. This ‘monster’ is the only living member of a lineage more than 100 million years old. At a distance in certain lights you’d think it’s a beached giant squid…. but in fact it’s an ‘underground tree that can live well over a thousand years. Welwitschia is a near-endemic in Namibia as it occurs in southern Angola as well, but its entire geographic range is limited to the Namib Desert.

Female adult Welwitschia in its habitat. Note how the ends of the leaves dry out over time.

According to Dr. Theo Wassenaar, researcher at the 54-year old Gobabeb Research and Training Centre, this remarkable plant survives for centuries in a hyper arid desert by finding pockets of slightly moist soil in rock fissures. Having excavated more than two dozen plants, and examined their root systems in detail, he says “essentially it appears as if they forage for water, using their roots as scouts and sending in the troops (fine roots) when they find a pocket of moisture. And the differences in moisture can be slight, a few percent at most.”

An additional anomaly is that, although it is very hard to tell at first glance, each plant only has two leaves, gradually torn to tatters by the desert winds and sun. These two gigantic leaves never stop growing during the tree’s lifetime. It also is under threat, sad to say, as we will describe briefly a bit later.

We traveled through nearly half of Namibia, from Walvis Bay in the center of the country, south to the Orange River on the South African border. And it is a breath-taking drive, because of the geology of this truly ancient desert, and the fact that the area has low population density, and still reasonably healthy ecosystems (except for the livestock fences galore) and large amounts of wildlife.

This state of affairs partly traces back to an inspired Nature Conservation Ordinance promulgated by the government back in 1975, which gave landowners property rights over the game animals on their land, within certain enlightened limits. Before that date, all wild animals, and all profits derived from them, went back to the state. Transferring ownership and the associated profits – from game viewing, trophy-hunting, and meat – to the landowners changed their perspective of wild animals. No longer competitors and predators of their livestock, to be kept out or exterminated, wild mammals became a source of revenue to be ‘cultivated’ and protected. As a result, the populations of large mammal species have seen impressive increases in the country. However, in some cases, this commercial incentive has led to some serious mismanagement. Indeed, some landowners have taken the view there is no such thing as too much game, and some private game farms maintain populations at unsustainably high densities in relatively small areas. Ironically, this can lead to some of the worst cases of overgrazing in the country!

Overall, the good health and integrity of the country’s ecosystems is a fantastic asset, of tremendous value for the nation. And – on paper, at least – the situation is admirable, with nearly 20% of the country in protected areas; since 2011, the entire coastline is protected inside three national parks, something no other country in the world can boast.

Still, the Namib desert and its fauna and flora face various threats, with dams affecting the hydrology of several ephemeral rivers, and a powerful and growing mining sector. In particular, the Welwitschia plains, where the largest southern population occurs, sit on top of a large uranium deposit. Efforts have been made to preserve the Welwitschia populations, and so far only two mines have been operating. But a third is currently being developed, which will be one of the world’s largest, and several other mining licenses may well be awarded if the price of uranium goes up again.

However the relationship of mining to restoration, and the role of the mining sector, are complex here as everywhere. As Dr Gabi Schneider, of the Namibian Uranium Institute told us, uranium mining is very localised, and the mine ‘footprints’ therefore are limited. Mining companies in Namibia have contributed in no small way to advancing the technology and science of arid land rehabilitation in the Namib, and also to research. Among other things they co-fund the Namib Ecological Restoration and Monitoring Unit program at Gobabeb. Uranium activities are governed by a Strategic Environmental Management Plan as well.

Furthermore, feral horses from abandoned tourism initiatives also roam the desert and eat Welwitschia leaves much more aggressively than native browsers do. Theo Wassenaar is working on this, and negotiating with local communities; it is a slow process but the Ministry of Environment and Tourism is also now engaging rural communities on this issue.

Further south, near the South African border, under the coastal dunes and off-shore, is one of the largest diamond deposits in the world, which have been mined for over a century. While some laudable efforts are being made to restore mine sites on this harsh, windy coast, it is a very difficult task, in one of the driest regions of the world.

During our travels, we met some of the restoration and conservation pioneers in the country, who are taking these vital actions to the next level, and working on more intimately linking wildlife conservation, the policies of both mining and tourism sectors and, in general, environmental education and capacity building. In the next blog post, we will talk more of the prospects and constraint for these initiatives.