Jenn Rosen is an undergraduate at the University of Missouri – Saint Louis. This summer, she participated in the Missouri Botanical Garden’s Research Experience for Undergraduates (REU) program. She spent eight weeks working with scientists in the Center for Conservation and Sustainable Development. Here, Jenn writes about her field experiment at Shaw Nature Reserve.

Conservationists and ecologists have recently sought to restore an ecologically important tree, the Ozark chinquapin (Castanea ozarkensis), that became threatened not by the effects of clear-cutting, but instead due to an incurable parasitic fungus called chestnut blight (Chyphonectria parasitica). After devastating its cousin (American chestnut) in eastern forests, the fungal disease moved west and began infecting chinquapin trees in the Ozark and Ouachita Mountains. The blight is presumed to have been brought into the United States by accident in the early 1900s when Chinese chestnuts (C. mollissima) were imported into the country. What makes the Ozark chinquapin and the American chestnut so susceptible to the disease is that the fungus’ wind-borne ascospores can easily enter through small cavities in their bark where they then grow and spread to neighboring trees. The blight causes Ozark chinquapin trees to die back to the roots, from which multiple stems resprout to form a large shrub-like growth form. Once a widely dispersed canopy tree in upland Interior Highland forests, chinquapins declined in abundance and are now often found as multi-stemmed, blight-infected subcanopy shrubs. 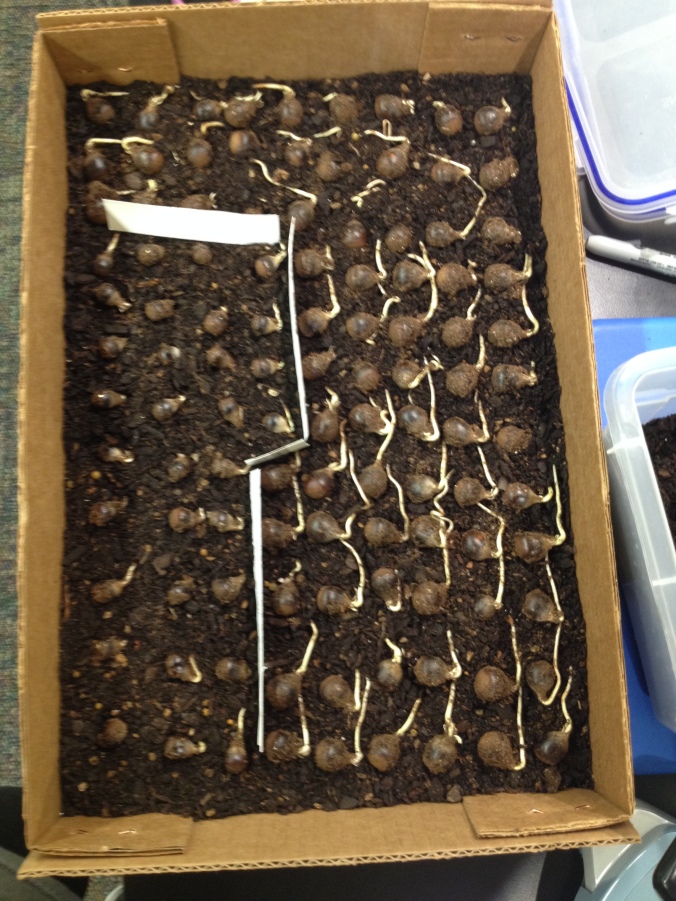 Castanea ozarkensis seeds, with white radicles, from two maternal lines. One group’s seeds are twice the size of the others. Large seeds hold more resources, which can give seedlings a head start. But larger seeds also face a higher risk of being preyed upon by rodents.

Chinquapins were prized by many folks of the Ozarks for the nutrient-rich nuts they produced, and its rot-resistant woods were used to make furniture, railroad ties, and fence posts, among other products. Additionally, large mammals such as black bears were known to forage in the Ozarks in search for the nutritious nuts to help replenish their fat reserves for the upcoming breeding season. There is a collaborative effort among groups to restore the chinquapin throughout its’ former range once blight-resistant seeds become widely available, estimated to take approximately 20 – 30 years.

Once blight-resistant seed becomes available, understanding how chinquapin trees successfully regenerate in the wild will be the key to successfully restoring this species. Unfortunately, little is known about the ecology of the tree prior to blight infection. Like other nut-bearing trees in Ozark woodlands (e.g., oaks), we suspect that there may be several limiting factors to chinquapin seedling recruitment, such as seed predation, poor soil quality and/or poor light availability. In order to test these predictions, we planted 320 chinquapin seeds (from two distinct maternal origins from the wild) across ten experimental replicates at the Shaw Nature Reserve (Gray Summit, Missouri). The criteria for each replicate was that there had to be a shrub microhabitat, which was dominated by the common understory tree, eastern redbud (Cercis canadensis), and an open habitat, separated by at least three meters. Like other Ozark woodlands, prescribed fire is currently being used to restore woodlands at the Shaw Nature Reserve and will likely be a key component to successfully reintroducing chinquapins back into the wild. After enduring many scrapes and pricks from constructing mammal exclusion cages for half of the seeds, roughly two weeks after planting the seeds we had a bounty of little chinquapin seedlings emerge.

We found that consumer treatment and microhabitat structure, as expected, influenced the rates of Ozark chinquapin seed emergence. Nearly all of the seeds that were exposed to small mammals were eaten or removed, even though seeds were buried a few centimeters in the soil. Interestingly, small mammals consumed seed at greater rates in shrub than open microhabitats. These results imply that understory vegetation structure determines where chinquapin seedlings can successfully recruit through its influence on small mammal behavior. Also, small mammals removed larger, and presumably more nutritious, seed at greater rates than smaller seed. Environmental factors, like light availability, did not affect seedling growth, but the short duration of the study may not have been adequate for the potential influence of these factors to become apparent. 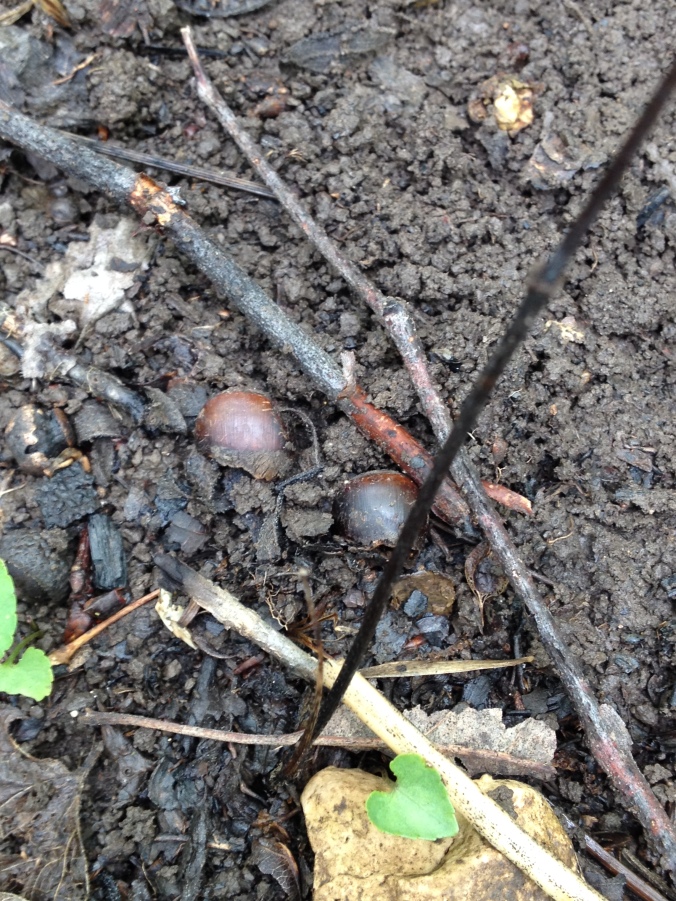 A thwarted attempt to breach a protective cage.

Our work contributes to a larger ongoing project by the Ozark Chinquapin Foundation to restore and conserve Ozark chinquapins. Given the high rates of seed removal, future restorationists will have to transplant chinquapin seedlings as opposed to seeds to successfully reestablish this species in the wild. However, once reintroduced seedlings grow to maturity and produce seed, our study suggests that microhabitat structure in Ozark woodlands will play a key role in determining the recruitment and growth rates of restored populations.