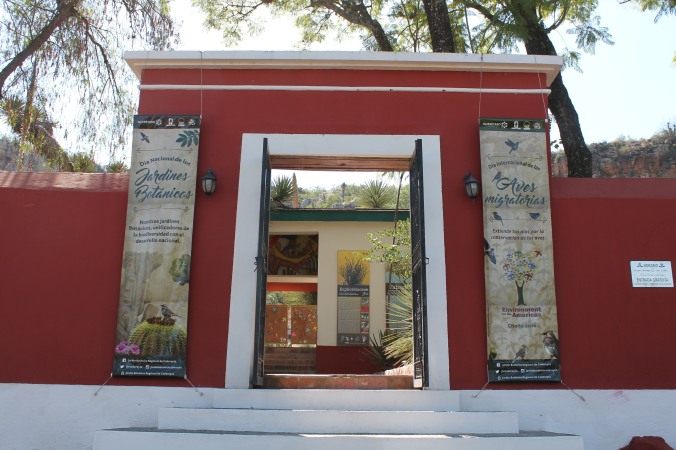 Cadereyta de Montes is close to the southern end of the Chihuahuan Desert, in the semiarid zone of Queretaro and Hidalgo. The place is relevant for biodiversity because of its number of endemic arid plants. However, today some habitats have been definitively altered and several special plants are on the brink of extinction.

One of those emblematic species, popular among succulent plant collectors around the world, is under severe threat to its survival. Worldwide growing successfully in cultivation, Mammillaria herrerae Werderm. is facing tough conditions and could eventually disappear from its original habitat. Scientists from the Cadereyta Regional Botanic Garden have done a survey which indicates that there are only a few hundred individuals remaining in the wild, that the species shows very low recruitment by seed, and that seedlings grow on rocky substrates beneath nurse plants.

Observing the remaining individuals is a shocking experience that moves to reflection.

They look small and fragile, but these geometric, almost spherical, plants are a beautiful example of the precision of nature, which gives each organism the characteristics it requires to survive in its natural habitat.

Densely covered with white spines and half-buried in the rock, Mammillaria herrerae hides its presence in the limestone soil. Its densely-distributed spines also help harvest fog at this elevation, where atmospheric moisture can condense. In an arid region like central Mexico, such adaptations provide species with strategies to reach the vital element.

A small group of Mammillaria herrerae struggle to persist on the steep slope. Photo by Hailen Ugalde de la Cruz.

Their permanence wouldn’t be menaced, but infrastructure development has reached them.

The pipes of the “Acueducto II” Hydraulic system climb more than 1200 meters to reach an elevated point from which it carries water by gravity to Queretaro City. Photo by Beatriz Maruri Aguilar.

In such a challenging environment, the construction of this infrastructure has severely damaged the landscape where Mammillaria herrerae lives. Photo by Beatriz Maruri Aguilar.

Efforts will continue. The Cadereyta Regional Botanic Garden team will conduct a 2-year demographic study, study the floral biology of the species, and describe plant community biodiversity at the specific distribution points. Stock propagation at the Garden will continue. The path is being prepared to, one day, return these jewels to their place in their natural environment, and to protect them better in situ.

The landscape around M. herrerae’s natural habitat. The mountain in the background is the southern facies of the Sierra del Doctor, part of the Sierra Madre Oriental. Photo by Hailen Ugalde de la Cruz.

At first sight, the arid scenery of the surroundings of the small city of Cadereyta, in Queretaro, Central Mexico, could transport us to past times.

Panoramic view from Cadereyta de Montes, and the ancient flavor of the streets. Photos by José Belem Hernández Díaz.

However, this semi-urban and semi-rural zone combines the features of ancient Mexican villages and landscapes with the unmistakable signs of the transformation that progress usually brings.

The peripheral landscape of Cadereyta de Montes (14,000 inhabitants) is showing signs of transformation. The urban area is gradually displacing the agricultural parcels and the native flora, giving rise to an interface formed of irregular patches that combine new houses and small agricultural parcels. A third type of ground, neither agricultural nor urban, is also present. This type of land is isolated from wild and agricultural areas, and can degrade easily.

The polygon of the Cadereyta Regional Botanic Garden, highlighted in yellow, in the vicinity of Cadereyta de Montes. Map prepared by Beatriz Maruri Aguilar.

In additional to its formal collections and buildings, the Cadereyta Regional Botanical Garden maintains an area that exemplifies the conditions found in much of the surrounding semi-arid region. Xerophytic shrub-dominated matorral is the main vegetation type which is generally highly degraded by human activities over the last decades, and surviving remnants in good ecological condition are only found quite isolated from agricultural areas. The vegetation comprises an interesting assemblage of native species in the Asteraceae, Poaceae, Solanaceae, Verbenaceae, Euphorbiaceae, Cactaceae, Fabaceae and other families, many of which are struggling to survive within large patches of invasive grasses.

A view from the top: looking down at degraded land to be managed by the Botanic Garden. Photo by Hailen Ugalde de la Cruz.

Another view from the top: Hugo, Beatriz, and James observe the transformed landscape of Cadereyta de Montes from one of the Garden’s balconies. Photo by Hailen Ugalde de la Cruz.

In this area, the Botanic Garden is working on restoration models that will be of interest – and direct use – to local landowners. It is an unusual model of assisted ecological restoration, with an agroforestry approach. The core idea is that through the implementation and monitoring of native vegetation and economic plant mosaics, it should be possible to combine conservation of biodiversity, sustainable development for small farms, and ecological restoration of degraded lands.

The pilot project will have two different types of parcels for comparative and demonstration purposes. One type will be built following an ecological approach to restoration, using only native plant species; the other will have an agroforestry approach, combining a group of native species with some selected edible/useful species. The area of the plots where the two strategies will be implemented will be prepared by removing an invasive species of grass (Melinis repens Willd. (Zizka), or “pink grass”). The agroforestry model will also generate useful products, such as agave leaves, which are used in the region for several purposes including to make pulque – an ancient beverage made by the fermentation of the agave sap, highly popular in this region. This model will also include aromatic plants – such as the asters Matricaria chamomilla L. and Calendula officinalis L. and the mint Salvia sp., as well as other useful plants as the euphorb Jatropha dioica Sessé, “sangregado”, commonly used as an ingredient in shampoos and formulas against gray hair.  These human uses are valuable in areas like this, where some human populations are suffering from an elevated degree of marginalization. The Cadereyta Regional Botanical Garden has developed propagation protocols of native species, and part of the stock produced will be used in the model described. Some of the stock of native species produced at the Cadereyta Regional Botanic Garden. Photos by Beatriz Maruri Aguilar (top) and Hugo Guadalupe Altamirano Vázquez (bottom).

At Cadereyta de Montes, some areas need a helping hand to keep the landscape in good shape. Other places hide extremely valuable living treasures that are currently struggling for survival. The Cadereyta Regional Botanic Garden is working every day to contribute to the conservation of the highly remarkable flora of the southern end of the Chihuahuan Desert, as well as to offer sustainable solutions for landscape use in a transforming environment. This way, the Garden intends to become an active participant for the achievement of Mexico’s goals for plant conservation.