Alex Fernando Mendes is an undergraduate researcher in the Tropical Silviculture Lab at the University of São Paulo, Brazil. He describes his thesis project, undertaken in dozens of forest fragments in the endangered Atlantic Forest biome. Currently, Alex is analyzing his data as a visiting researcher in the Center for Conservation and Sustainable Development.

Historically, intensive agriculture in the Brazilian Atlantic Forest has caused large-scale deforestation of this biome. However, new legal requirements, land exhaustion, and the shifting priorities of farmers have recently allowed forests to regenerate on some formerly farmed lands. Given the unique nature of the Atlantic Forest, its high species endemism, and its potential for providing ecosystem services, the Tropical Silviculture Lab (LASTROP) at the University of São Paulo, coordinated by Prof. Pedro Brancalion and its partners, initiated a project in 2014 to better understand the structure and composition of these new forests.

However, forests aren’t made solely of trees. Among the plant components of a forest, there are others life forms such as epiphytes, lianas, and herbs that contribute to biodiversity and provide food, water, and shelter for many animal species. Epiphytes are plants that use other plants as support. Due to their sensitivity to environmental changes, epiphytes can be used as bioindicators. Therefore, we asked how these plants are doing in these young regenerating forests. And what landscape and local attributes facilitate or hinder their recolonization? 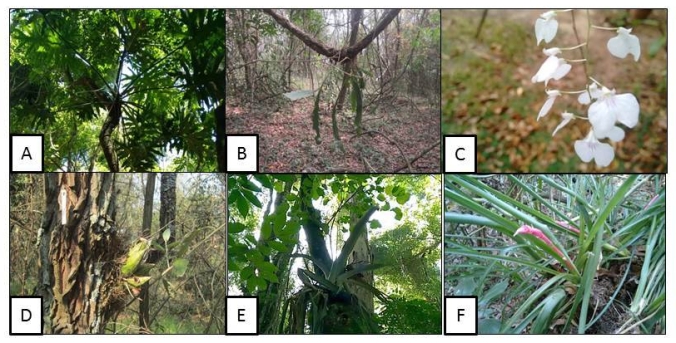 To try to answer these questions, we are studying the epiphyte communities in 40 second-growth forests (i.e., forests that were once completely cut down). We are considering three landscape drivers (distance from watercourses, distance from forest edge and forest cover in a 1-km buffer around the remnant) and four local drivers (previous land use, forest age, liana abundance, and tree basal area). We expect that forests close to watercourses would provide the moisture required by epiphytes. We expect to find more epiphytes further from the forest edge since forest cover in more conserved forests may limit their establishment. Since our forests regenerated from abandoned eucalyptus plantation and pastures, we want to check if the non-native eucalyptus could act as a filter preventing epiphytes recolonization. We also expect that older forests and forests with more basal area could house more epiphytes than young forests. Finally, field observations made us wonder if lianas could compete with epiphytes by occupying the same niche.

Of the more than 6,000 phorophytes (trees that could support epiphytes) sampled in these 40 forests we found 398 epiphytes belonging to 21 morphospecies distributed in 4 families (Araceae – 1 species, Bromeliaceae – 14 species, Cactaceae – 5 species, Orchidaceae – 5 species). Only three species, Tillandsia pohliana, Tillandsia tricholepis, and Ionopsis utricularioides, represented more than half (59.5%) of all epiphytes found in second-growth forests. The genus Tillandsia was expected to be abundant in these young forests, since these are disturbance-adapted species that can even be found growing on power lines in cities.

Epiphytes of the genus Tillandsia (Bromeliaceae) are often found in extreme microenvironments in urban areas (Photos by A. Mendes, 2017).

Our analysis is in progress, but our preliminary observations suggest that forests closer to watercourses and closer to forest edge are more likely to have epiphyte recolonization than forests far from edge and watercourses. Forests regenerated on pastures have more epiphytes than those on abandoned eucalyptus plantation. Our dataset will soon be upgraded with new forest types: conserved and disturbed old-growth forests, and mixed tree plantings for forest restoration, totaling approximately 70 forests with epiphyte samples.

With this research, we hope to find out the local and landscape factors that contribute to epiphyte recolonization in second-growth forests. In practice, this will allow us to locate sites with limited potential for spontaneous colonization of this life form to take actions that promote colonization and establishment, such as introducing individuals. Finally, by identifying epiphytes species that are more sensitive to disturbance, we can focus our reintroduction interventions.

Note: The image of Philodendron bipinnatifidum featured at the top of this post was taken by David Stang.

Leighton Reid and Miguel Chaves are investigating how tropical forest restoration influences plant diversity. Leighton is a postdoctoral fellow in the Center for Conservation and Sustainable Development. Miguel is a doctoral student at University of Missouri Saint Louis.

Epiphytes are plants that live non-parasitically on other plants. That is, they grow on the trunk or branches of another plant (often a tree) without extracting nutrients from it, as mistletoes do. In Missouri, one example is the resurrection fern (Pleopeltis polypodioides), an epiphyte famous for its ability to re-green after lengthy desiccation.

In tropical forests, epiphytes are much more diverse. Science writers commonly use the word “festooned” to describe the profuse growth of aroids, bromeliads, ferns, and especially orchids on tropical trees. In certain places, epiphytes can make up as much as 50% of a forest’s vascular plant species.

We were curious about how ecological restoration influences epiphyte communities, so over the summer Miguel Chaves worked with local conservationist Juan Abel Rosales and botanist Federico Oviedo to survey the vascular epiphyte composition and abundance on 1086 trees growing in thirteen restoration sites in southern Costa Rica. They found about one hundred species, several of which are depicted below.

This fall, we are analyzing these data to learn about how tree planting influences epiphyte community assembly compared to natural forest regeneration. In particular, we hope to shed light on two questions:

(1) To what degree does tree planting facilitate epiphyte recovery?

(2) At what spatial scale does local forest restoration interact with landscape context to influence epiphyte recolonization? 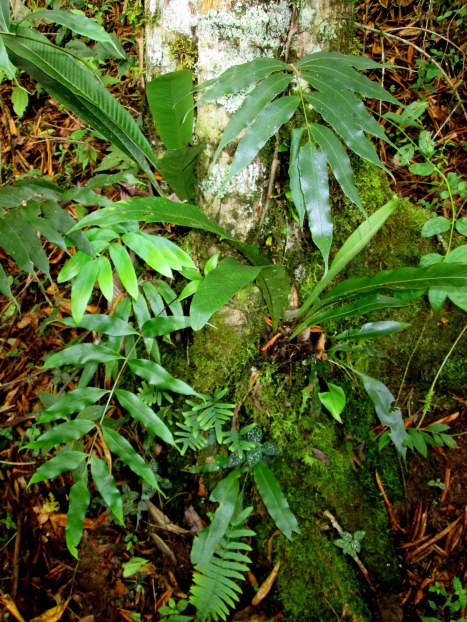 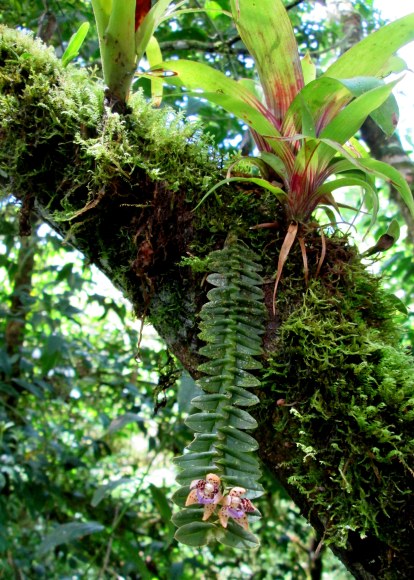 A showy orchid (Dichaea cryptarrhena) hangs from a mossy bed below two bromeliads.

Miguel and Juan Abel at work next to a particularly good-looking bromeliad (Guzmania zahnii). Photo by Karen Holl.

Plants that use other plants for support but also have roots in the ground are called “hemiepiphytes”.

These aroids (Monstera sp and Syngonium hastiferum) are secondary hemiepiphytes, that is, plants that begin life on the forest floor and climb upwards towards the light.

Many of the epiphytes that Miguel and Juan Abel observed were flowerless seedlings, like this Gongora armeniaca (Orchidaceae).