James and Thibaud Aronson post the third of four photo essays on their recent field trip to Namibia and South Africa.

As soon as we crossed over the border from southern Namibia into northwestern South Africa, it was clear that we were looking at a whole different story. We were now in the driest part of South Africa and one of the most sparsely populated. Also, Namaqualand – a winter-rainfall desert of ca. 50,000 km2 – is one of the biodiversity hotspots of the world. The area is well known to tourists for the few weeks in August-September (the southern winter), when hundreds of plant species, benefiting from the winter rains, put on an incredible floral display and tapestry of textures and colors, down below your ankles.

A rich community of toe-high succulents endemic to saline quartz patches . This photo was taken at Douse The Glim, not far south of Garies in southern Namaqualand. Many endemics of the Mesembs (Mesembryanthemaceae) occur here, including the sunken “Silver skin”, Argyroderma delaetii,  Cephalophyllum spissum, and “Redbeads”, Sarcocornia xerophila, a cousin of the cosmopolitan Salicornias. Identification of plants: Sue Milton and Richard Cowling, both of whom we will meet in the next blog post.

Argyroderma delaetii, a dwarf, sunken ‘silver skin’, of a genus restricted to the Western Cape, South Africa, in the Knersvlakte Nature Reserve . This photo was taken by Sue Milton in 2014, a much wetter year  than 2016.

All in all, apart from natural history buffs, botanists, and conservationists, not much attention is paid to this poor, rural area. In a nutshell, the rapidly exploitable resources that could be had – copper, timber, and the like – are now long gone. What is left is – to speak bluntly – a lot of poverty and a lot of land degradation. And a lot of biodiversity: indeed the Succulent Karoo region of Namaqualand and southern Namibia is one of the biodiversity hotspots of the world.

We met with some of the people making a difference there, working with South Africa’s most iconic environmental program, the Working for-family of government-funded programs, working together to restore natural capital and social capital at the same time.

Sheep grazing on  abandoned crop land in Namaqualand, near Leliefontein.

The Western Cape, South Africa has had a tradition of rather damaging sheep farming for centuries. But the country as a whole has also had a proud tradition of nature conservation for over a century, which is a lot more than most countries can boast.

However, what is  even rarer is that ecological restoration has been part of the national vocabulary for a generation. A game-changing initiative that moved the country to the next level was a government program launched in 1995, called Working for Water, or WfW.

South Africa was faced with two metaphorical birds. On the one hand, approximately half of its population lived (and unfortunately still does) in poverty. On the other, several invasive non-native tree species had taken over many of the country’s waterways, outcompeting native species, choking river beds, and draining the water tables.

Working for Water was the stone. Every year it hires some of the country’s poorest people –  38,000 in 2015 –  in rural areas in all nine provinces and employs them to remove those noxious woody species. Since its inception, the program has spent hundreds of millions of dollars and provided desirable jobs near home each year. The benefits to people are in fact multiple. Workers are provided with both an income and on-the-job training and capacity-building, with some going on to start their own companies, providing ecological restoration services to private landowners. They also acquire an esprit de corps  and pride in their achievements.

With the same ‘stone’, over 2 million hectares, mostly along water courses, have been cleared of invasive trees and water supply has been notably increased for the associated communities. Finally, the large amounts of timber and vegetable biomass harvested from the invasive trees are used to produce eco-furniture, which is then sold to help finance the program. Research is under way to find methods for producing biofuel from the woody weeds as well as to improve the ecological impact of the effort. 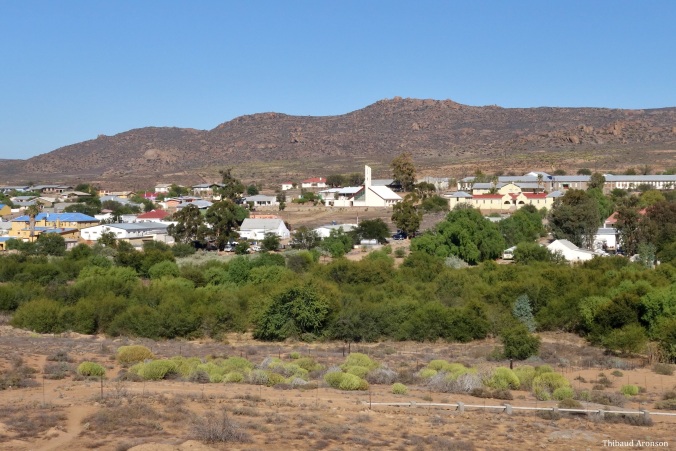 The small town of Garies, southern Namaqualand. The riverbed is completely dry, but there is enough moisture in the soil to support what may look like natural riparian vegetation. In fact, not a single tree is native. Instead they are Mesquites (Prosopis hybrids) from South America, Salt cedars (Tamarix hybrids), and Australian Wattles (Acacia karroo,  A. cyclops). 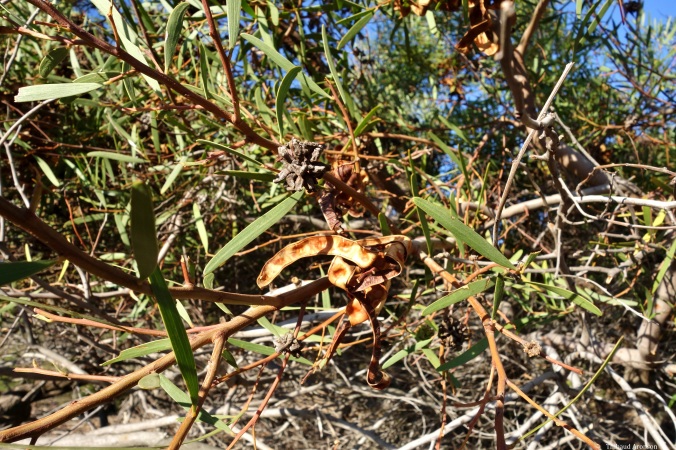 The Australian wattle (Acacia cyclops), one of the worst invasive trees in various habitat types in South Africa.

WfW now oversees over 300 projects across South Africa, and its success has led to the establishment by successive government administrations of several other programs, such as Working on Fire, Working for Wetlands, and Working for Woodlands. The goals are ambitious and together this ‘family’ of Working for- programs exemplifies the emerging understanding that ecological restoration can be a bridge-builder between long-term conservation efforts, and sustainable socio-economic development goals. At a time when protected areas are menaced worldwide by dubious government cop-outs on protected areas, South Africa is a refreshing exception that deserves praise and celebration.

Thanks to introductions set up by our friend Dr. Christo Marais, the number 2 man of WfW, we had a chance to talk to Ronnie Newman, Amanda Bourne, and Halycone Muller from Conservation South Africa (CSA), who work in Namaqualand on restoration projects, in close liaison with SAN Parks (the body that governs South African national parks), and through financing of Working for Wetlands.

From left to right, Amanda Bourne, Ronnie Newman, and Halcyone Muller at CSA offices in Springbok.

SAN Parks and CSA use funding from a new programme under WFW called Land User Incentive Programme, to hire people to restore degraded rangelands.  CSA and SAN Parks are thus implementing agents for Working for Wetlands in this arrangement, something new in the history of the Working for- programs. The focus of this trio here in Namaqualand is to repair erosion gullies, called “dongas” in southern Africa. These are very often a result of over-stocking and overgrazing by domestic livestock and get continually worse if left unattended. Thanks to this government-funded effort,  workers build beautiful gabions and other structures to slow water flowing downhill, catch sediments and eventually fill the gullies. Most of the gabions are made with metal baskets, or simply dry stones carefully assembled by skilled workers to make low but sturdy walls. However, in some cases, larger gabions are made out of concrete. As Amanda Bourne put it,  “this is about supporting the people who live and work on the land to restore and better manage it.  They are paid at a supplementary rate to undertake restoration on their own land, which will directly benefit their other (mostly agricultural but not only) activities.”

Working for Wetlands workers building a series of stone retaining walls, near Kamieskroon. In small rivulets like this one the metal baskets of typical gabions are not easy to use and are not deemed cost-effective.

A week later, in Cape Town, we met up with Christo Marais, and with Sarah Frazee, the head of CSA. She told us that they aim at working at critical spots upstream of water points of importance to local communities whose livelihoods are largely dependent on sheep grazing. CSA also provides veterinary services at no cost to participating farmers, and tries to persuade them to reduce their herds and flocks to avoid over-stocking, especially in drought years like the current one. As Sarah put it, 80% of the biodiversity in Namaqualand is associated with wetlands, which makes focusing on their restoration important from a conservation perspective. But, as more broadly throughout South Africa, public-private efforts like this one can effectively address biodiversity, water supply, land erosion, as well as poverty and related social issues at the same time.

From a classical economics perspective, however, ecological restoration work in arid lands is slow, and often hard to justify, since the value of the land for production purposes is so low. However, not just here in the Western Cape, but throughout South Africa, the multiple goals of the Working for- program are being pushed forward and steadily refined.

There has been frequent criticism of the programs and not without cause. In particular, monitoring has not been implemented as well as could have been hoped, though the program has continually improved since its inception, both scientifically and in terms of its impact on ecosystems and people. It will be a long battle to achieve all of its goals, but despite its flaws, it remains one of the absolute best examples worldwide of programs that combine restoration of social and natural capital. 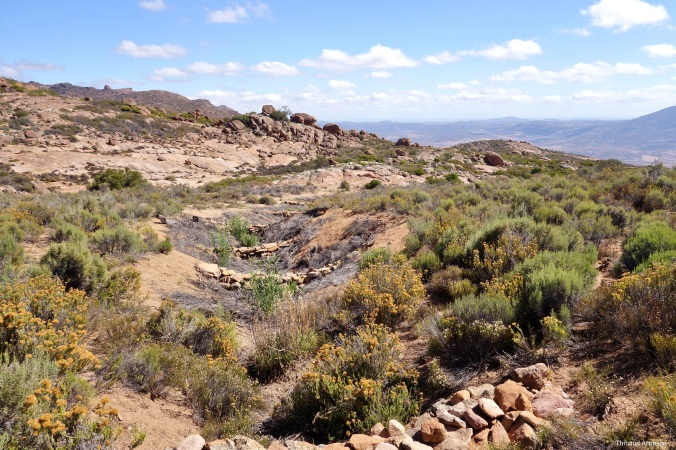 Six months after the building of the stone walls near Lileifontein, complemented by brushpacking to help build up organic matter, things are looking pretty good.

We close with a mention of the fabled triple bottom line – the holy grail of progressive governments. How to achieve social, ecological, and economic benefits with a single program? Next steps in improving the work of the Working for- programs, according to  Christo Marais, should include: 1) still greater investments in education, capacity-building and outreach to bring all of South Africa’s society on board with the restoration movement, and 2) galvanizing private investment in restoration. The introduction of implementing agencies like SAN Parks and CSA should help with both.

In our next two blogposts, we will report on what some private landowners and three wonderful NGOs, including RENU KARROO and F.O.S.T.E.R. are doing in the Nama Karroo and Thickets biomes.