Joseph Smith is a rising senior at Lake Superior State University. This summer, he studied the effect of prescribed fire on Eastern Bluebird nesting success at Shaw Nature Reserve as part of  MBG’s NSF-funded Research Experience for Undergraduates (REU) program.

Among the rich plant diversity at Shaw Nature Reserve are a wide range of animal species, including the Eastern Bluebird (Sialia sialis). The Nature Reserve is home to an extensive bluebird trail consisting of 86 nest boxes in the north-central region of the reserve. This summer, I have been working with Dr. Leighton Reid and a citizen scientist, Lynn Buchanan, in an effort to understand the effects that land management practices have on bluebird nest success.

Prescribed fire is one of the most important management practices used at Shaw Nature Reserve. In the 2016-2017 burn season, for instance, nature reserve staff set fire to 306 ha (756 acres) of woodlands, prairies, and glades to restore and maintain open vegetation structure and a high diversity of native plants. However, it was unclear what effect these fires might have bluebirds.

We hypothesized that fire might affect bluebird nesting success in two ways. First, fire could reduce the food supply for nesting birds. When understory vegetation burns, many arthropods are also killed, and it takes some time for their populations to rebound. During the lag, bluebirds might have less to eat, which could result in poorer nest success.

Second, fires could increase nest success by reducing the risk of snake predation. Bluebird boxes at Shaw Nature Reserve are equipped with baffles to prevent snakes from getting in, but snake predation still occurs sometimes. After a fire, there is less vegetation to hide snakes from their own predators, like raptors, and we surmised that fewer snakes could mean more successful bluebird nests. 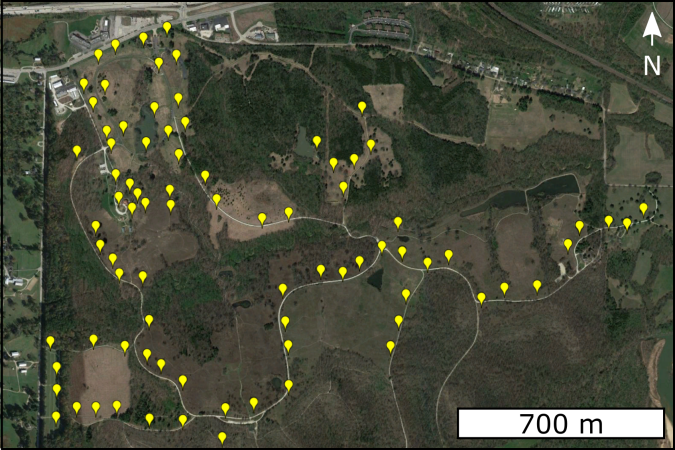 We tested our hypotheses using a long-term dataset collected by volunteers. Over the past eight years, Lynn Buchanan and her team have monitored the nest boxes on the bluebird trail and kept records of their observations. Each week during the breeding season, they peek into all of the boxes and record the number of eggs and nestlings, how many nestlings fledged, and whether or not the nest was predated.

With statistical help from Washington University researcher Joe LaManna, we found that prescribed fire had little or no effect on bluebird nesting. We compared areas that were burned with areas that were mowed, and we also compared burned areas at different time intervals since the most recent fire (0-3 years). Likewise, we found no effect of prescribed fire on the rate of snake predation.

While the lack of significant results can be slightly disheartening after an entire summer of work, it is reassuring that the bluebird population is thriving at Shaw Nature Reserve. Overall, we calculated that 90.8 ± 0.5% of bluebird nests produced at least one fledgling. In addition, two other species (House Wrens and Tree Swallows) that commonly use bluebird boxes also had high nest success.

There are more aspects of bluebird nesting to look at. For instance, the time from when an egg hatches until the chick leaves the nest could be longer in recently burned areas if there is less food (i.e., arthropods) available. In the meantime it appears the bluebirds are living well at Shaw Nature Reserve.