Matthew Albrecht is a Scientist in the Center for Conservation and Sustainable Development at Missouri Botanical Garden. Here he describes a recent fieldtrip to the Ouchita Mountains to study outlying populations of the federally threatened Missouri bladderpod, Physaria filiformis.

Situated between Rocky Mountains to the west and the Appalachians to the east lies the often overlooked Ouachita (pronounced WAH-shi-tah) Mountains of central and western Arkansas and adjacent Oklahoma. Unlike the Rocky and Appalachian Mountains, the Ouachitas are a relatively small mountain chain that trends primarily east-west. Despite occupying a relatively small area, the Ouachitas harbor a large proportion of the region’s plant diversity and represent a remarkable center for endemism including many rare plants species with extremely narrow distributions.

On a recent spring afternoon, Christy Edwards and I had the opportunity to visit the relatively rare and poorly studied shale outcroppings of the Ouachitas with botanists Brent Baker and Diana Soteropoulos of the Arkansas Natural Heritage Commission. In the Ouachitas, shale formations outcrop on gentle to steep south- or west-facing slopes and occasionally on gently sloping drainages. Upon first glance, these outcroppings with exposed fragments of thin, black shale and patches of sparse vegetation cover appear somewhat other worldly. Upon closer inspection, one finds tucked between shale fragments a number of xeric-adapted herbaceous species capable of surviving in this harsh environment, where the dark, sun-scorched shale at the surface creates extreme ecological conditions.

Shale barrens and glades are mosaic plant communities consisting of a remarkable number of endemic, rare, and narrowly-distributed species. According to NatureServe, 36 plant species of state conservation concern and more than 20 globally critically imperiled, imperiled, or vulnerable species occur in this system. New species are still occasionally discovered and a few species remain undescribed in the Ouachita shale barrens. For example, we saw a striking purple-flowered undescribed species of wild hyacinth (Camassia sp. nova) during our visit.

The star of the show that day and the focus of our research expedition to the Ouachitas was the federally threatened Missouri bladderpod (Physaria filiformis).  Many members of the genus Physaria – commonly known as bladderpods due to their inflated seed pods – are recognized for their narrow distributions and edaphic endemism, or restriction to unusual soils. As a small-statured winter annual, Missouri bladderpod showcases brilliant yellow flowers in early spring and specializes on thin-soiled calcareous (dolomite and limestone) outcrops in northern Arkansas and southwestern Missouri. However, at its southern range limit in the Ouachitas, Missouri bladderpod is known from just a few isolated shale glades and barrens.

Prior to visiting the Ouachitas I wondered how a presumed calciphile like Missouri bladderpod existed on shale formations, which typically produce acidic soils. Perhaps like a few other species of rocky outcrops in the region – such as Sedum pulchelum (widow’s cross), and Mononeuria patula (lime-barren sandwort) which occur on both acidic and calcareous substrates – I surmised MO bladderpod may also tolerate a broader range of edaphic conditions than previously thought. However, I soon learned the shale outcroppings we visited were interbedded with limestone and supported other calciphilic indicator species such as Ophioglossum engelmannii.

A case of cryptic speciation in the Ouachitas

Once known only from limestone glades in southwestern Missouri, botanists over the years have discovered populations of Missouri bladderpod on limestone, dolomite, and shale outcroppings in scattered locations throughout Arkansas, denying Missouri’s claim of its only endemic species. A recent study led by Christy Edwards at the Missouri Botanical Garden examined range-wide (Arkansas and Missouri) genetic variation in Missouri bladderpod and the degree of genetic differentiation among populations on limestone, dolomite, and shale. Interestingly, genetic data showed isolation by distance – meaning that as geographic distance increased among populations so too did genetic differentiation. Most strikingly, the geographically isolated shale populations in the Ouachitas were highly genetically divergent from dolomite and limestone glade populations further north in Arkansas and Missouri. This strong pattern of genetic differentiation points to a possible cryptic speciation event in the Ouachitas and a previously unrecognized extremely rare species. On one hand, the genetic data was somewhat surprising given there are no obvious morphological differences among Ouachita shale populations and P. filiformis. Conversely, the data do support the remarkable pattern of narrow-endemism observed throughout the Ouachita Mountains.

As we trekked across Arkansas for a few days – along with Brent and Diana who generously shared their time and expertise – collecting fresh material of Missouri bladderpod for a deeper research dive into whether morphological traits differentiate this previously unrecognized cryptic species in the Ouachitas, the need to conserve and restore glade habitat became ever clearer. At present, there are only three known Ouachita populations, making this cryptic species extremely rare and vulnerable to extinction. Many shale glade and barrens systems are now severely damaged or have been destroyed by mining activities. Fortunately, the largest population we visited consisted of thousands of plants scattered across a shale glade and barrens complex that has been restored and managed with fire and woody thinning by the Ross Foundation. In the absence of periodic, appropriately-timed prescribed burning, glades and barrens slowly become encroached with woody species that eventually choke-out sun-loving plants like Missouri bladderpod.

Other populations of Missouri bladderpod eek out an existence on small stretches of outcrops on roadsides or private property maintained as cattle pasture. These sites prove challenging to conserve and restore. Sadly, we did visit some sites where populations were barely surviving due to degraded habitat conditions. However, two sites we visited gave us a glimmer of hope that Missouri bladderpod will continue to survive and thrive. First was a newly discovered dolomite glade population on private property in north-central Arkansas. The property owners recently thinned woody vegetation and began prescribed burning to restore their glade and woodland ecosystem. When we visited, Missouri bladderpod was thriving after a recent prescribed burn. Similarly, the second site we visited on public property had been thinned and burned in recent years, resulting in a diverse plant community and flourishing Missouri bladderpod population. These success stories illustrate the importance of restoring degraded habitat to conserve our rarest components of biodiversity.

To learn more about the Missouri bladderpod, read the new, open access paper by Christy Edwards, Matthew Albrecht and others.

Some 300 million years ago, the South American plate collided with the North American continental crust. The resultant buckling formed the dramatic topography of the Ouachita Mountains, which extend from southwestern Arkansas into eastern Oklahoma, defining the southern extent of the Interior Highlands of mid-continental North America.

The fold belt topography of the Ouachita Mountains

Although the Ozark region, which forms the northern portion of the Interior Highlands, has received more attention in terms of both scientific literature and public familiarity, the Ouachita Mountains have a larger number of endemic plant taxa. In total, fourteen endemic plant taxa have been documented from the Ouachita Mountains, several of which have only been described in recent decades. As a member of the Center for Plant Conservation network of botanical gardens, we work to conserve imperiled plant species in the southeastern United States through seedbanking, reintroduction, and research to better understand the ecology and life history of these species. This research ranges from experiments to understand the ecological conditions necessary to break dormancy and induce germination, to field experiments that aim to provide guidance for ecological restoration and management of the communities and ecosystems in which these taxa occur.

Ouachita mountain goldenrod (Solidago ouachitensis) is one of the rare and endemic taxa which we are working to conserve in this region. Recently, during the week of November 17th-21st, Matthew Albrecht and I traveled to the Ouachita Mountains to collect seed of S. ouachitensis. A minor snowfall preceded our arrival, bringing with it unseasonably low temperatures. The snow remained for several days on north facing slopes, which increased both the scenic beauty of the region and the difficulty of traversing steep terrain.

Collecting seed of Solidago ouachitensis with a light dusting of snow

The trip was perfectly timed to coincide with the peak of seed maturation, which made for a successful collection effort. Solidago ouachitensis occurs predominantly in two distinct habitat types – mesic oak dominated forest near the summit of slopes and also mixed hardwood forest of riparian toe slopes. Several populations occur along the Talimena National Scenic Byway, where the ridge tops are dominated by a dwarf forest comprised of a near continuous canopy of gnarled, windswept white oak. Solidago ouachitensis occurs on several north-facing aspects down slope from these dwarf forest. Populations vary greatly in size, from no more than several individuals up to thousands of individuals. It appears that the most robust populations (in terms of total population size, the proportion of the population producing seed, and the reproductive output of individual plants) occur in areas with evidence of recent fire. Prescribed fire is used as a management tool in the Ouachita National Forest, which appears to be beneficial for Solidago ouachitensis. To further explore this, we’re initiating experiments to examine whether chemical compounds in smoke enhance germination. 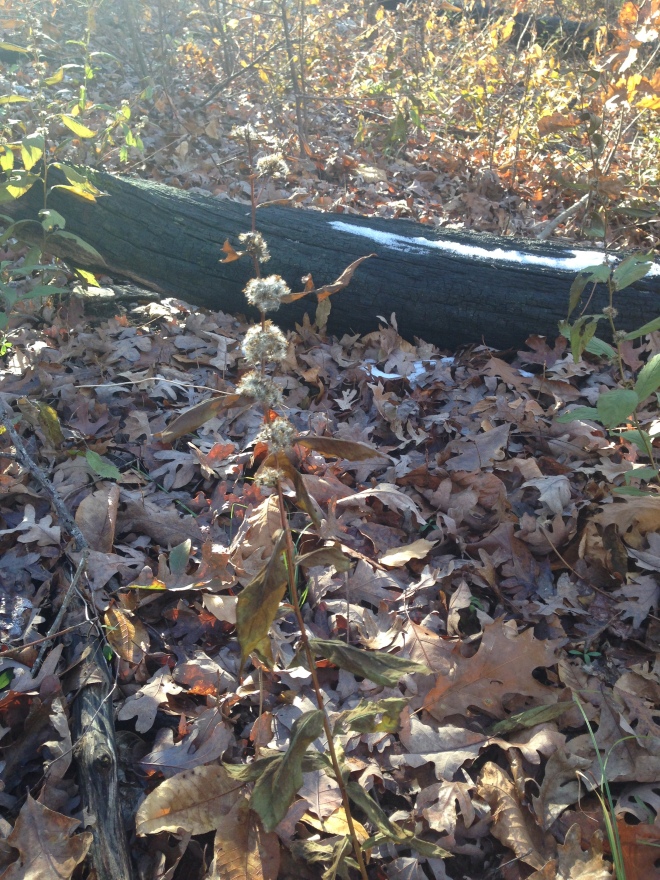 Solidago ouachitensis with mature seed. A charred log in the background provides evidence of recent fire.