Estefania Fernandez Barrancos is a PhD student and Christensen Fellow at the University of Missouri St. Louis, where she is affiliated with the Harris World Ecology Center and the Center for Conservation and Sustainable Development at the Missouri Botanical Gardens. Estefania has previously written about how to restore bromeliad populations. Here she describes a recent study asking how well hemiepiphytic aroids recover in secondary forests in Panama.

Most people know aroids as the familiar swiss cheese plants found growing in hotels and shopping malls. But few people realize that the aroid family (Araceae) is the fifth most diverse plant family on Earth. These plants provide essential food and refuge for birds, bats, insects, and primates in tropical forests throughout the world.

Like many other plants, aroid populations are dropping because the rainforests where they live are being converted into farms. My new research shows that aroids are also slow to recolonize new forests that become available.

Before I describe that research though, here is some botanical jargon for the uninitiated. Epiphytes (a.k.a. air plants) are plants that grow on other plants (but not as parasites). Hemiepiphytes are plants that grow on other plants but only for part of their lives. Many aroids are hemiepiphtyes because they start life in the soil of the forest understory and grow until they find a tree. Then they climb up the tree and live above the ground, but they always keep a connection to solid earth.

To study their recovery, I surveyed hemiepiphytic aroids in native tree plantations (9-years old), natural secondary forests (8-14-years old), and mature forests (>100-years old) near the Panama Canal. These forests are part of Agua Salud – a tropical forest restoration experiment led by the Smithsonian Tropical Research Institute. In the dense forest, I found aroids by looking for their stems coming down from the trees, then I followed the stem with binoculars until I found their leaves, which helped me identify the species. In all, I surveyed 1479 trees this way. 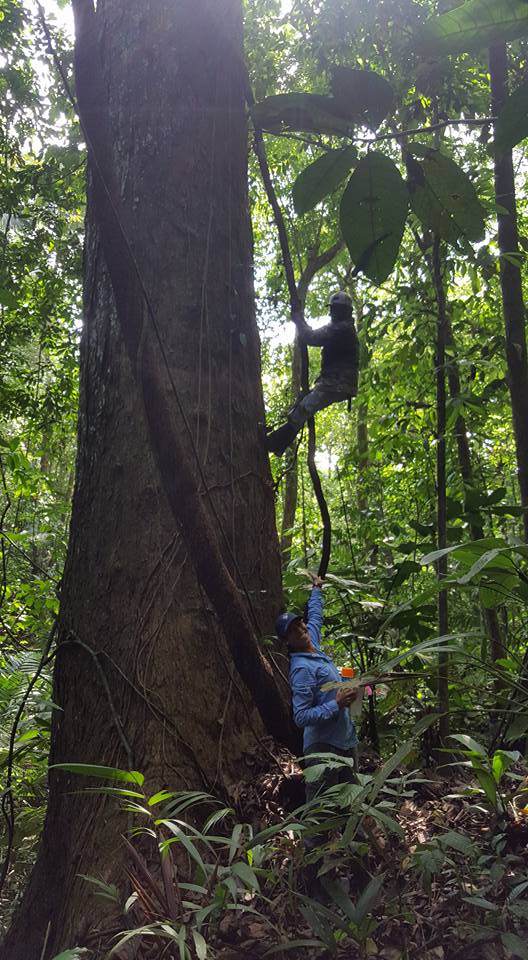 Estefania Fernandez (below) and field assistant Carlos Diaz (above) look for aroids in a mature forest tree in Panama.

Why do aroids have recovery troubles?

One reason for the lack of aroids could be that seeds from adult aroids in mature forests can’t reach the new forests. This seems unlikely because all of the secondary forests and plantations in my study were close to mature forests full of aroids, less than one kilometer away. Also, birds that are present in secondary forests are known to eat aroid fruits and disperse their seeds.

Another reason could be that the young forest canopy is too open for aroid seeds to germinate and grow. Unlike most plants, some aroids start out life growing away from light and towards darkness. (This has another great word: skototropism). It seems counterintuitive since most plants need light. But it is actually a good strategy. By growing away from light, aroid seedlings are more likely to run into a tree, which they need to climb up into the canopy and get to the light that they need to photosynthesize. So it is possible that there is too much light in the young forests and it keeps the aroid seedlings from finding a host tree.

Whether dispersal or establishment limits aroids in secondary forests, it is likely that more time will help. As forests become older and darker and birds bring in more seeds, aroid populations should eventually begin to recover. My research suggests that there is a considerable lag time required for aroids to recolonize disturbed habitats such as secondary forests and plantations.

More importantly, my study highlights how important it is to hold onto old forests. Forest restoration is a poor substitute for mature forest conservation. To the extent that we can prevent older forests from being cut down, it will help preserve many species of aroids as well as other plant and animal species that are threatened by habitat loss.

You can read more about Estefania’s research in her new open-access paper in Tropical Conservation Science, or on other posts from Natural History of Ecological Restoration (here and here).

One thought on “Hard times for hemiepiphytes: Aroids have trouble making a comeback in second-growth forests”