James and Thibaud Aronson post here the first of two reports from New Zealand, where they spent the first three weeks of January 2017, learning about the remarkable restoration and conservation work going on there.

New Zealand, or Aotearoa (Land of the Long White Cloud, as the Maori call it), is one of the world’s leaders in terms of conservation and restoration. However, it certainly did not start off that way.

New Zealand was first settled by Polynesian sailors about 750 years ago, one of the last places on Earth to be colonized by humans. These pristine islands, which had stood in isolation for 80 million years, harbored a wealth of unique lifeforms, from the iconic kiwi (of which few people know there are in fact 5 species), to the weta (cricket relatives in one of several genera endemic to New Zealand, some of which  are among the largest insects in the world), and the tuatara, large, endemic, lizard-like reptiles, the last survivors of an order that thrived 200 million years ago.

The island did not lack predators: just think of the now-extinct Haast’s eagle (Harpagornis moorei), the largest eagle to have ever lived, and the fierce, flightless moa (nine species in six genera; all extinct), giant relatives of the ostrich, the biggest of which stood fully 3.6 meters (12 feet) tall and weighed 230 kg (510 lb). However, Aotearoa harbored practically no land mammals, the only exceptions being two species of bats. Therefore, many native animals were flightless, absolutely unafraid of humans and their dogs, and thus very easy to hunt.

Faced with this incredible boon, the Maori did what humans have done on every single island and continent they have ever reached: they took and took without restraint. All 9 species of moa, the most rewarding of prey, were gone within 200 years. Seals, once abundant along all coastlines, vanished from many areas. Forced to change their ways, the Maori shifted to eating more fish and shellfish, and took to cultivation, burning down forests for cultivation, and also started eating the bracken fern that grew back in abundance after fires. However, and very unusually, having caused widespread extinctions, the Maori eventually introduced rāhui, a strict system of preventing all unauthorized persons  to enter an area, or harvest a specific resource. The intention was to allow regeneration, such as certain animal food sources, or plant materials – such as wood from a certain tree species prized for carving,  thus avoiding local depletion of resources or even further extinctions. This system is still in use today among Maori, and can also be declared by different agencies of the NZ government!

Billy Boy, a Maori guide in the Waipoua forest, whose connections to New Zealand’s wilderness is an essential part of his identity. Whenever one of his grandchildren was born, the first thing he did was to take them to the forest and begin their introduction to the natural world.

However, things took a significant turn for the worse 200 years ago, when Europeans reached New Zealand. They rapidly established large-scale logging activities, targeting the various species of native conifers, which can live for millennia and reach enormous sizes. For a few decades, whaling and sealing were vastly profitable as well, until populations crashed. What’s more, the Europeans brought with them cats, black rats, and later possums, stoats, and other carnivorous mammals. All of these species have since gone feral, and become one of the foremost ecological problems the country faces today. Since human settlement, 47 endemic bird species have gone extinct, about half from Maori over-hunting, and the remainder in the last 2 centuries, wiped out by feral predators, as were various species of reptiles, amphibians, and invertebrates. Many more species have no doubt suffered the same fate, disappearing before they were even documented.

However, in recent decades, New Zealand has made an impressive and inspiring commitment to preventing future degradation and in fact taken many great strides towards rolling-out restoration at a national scale. This merits celebration and emulation. During our 3-week trip, we got to see first-hand some examples of the conservation and restoration work underway.

One of the most iconic trees of New Zealand is the kauri (Agathis australis). These massive conifers once dominated the forests in much of the warmer, nearly subtropical, northern part of the country. They can live well past a thousand years, grow 50 meters tall, and reach a girth comparable to that of the Californian sequoias. The largest individual known today is called Tane Mahuta, or Lord of the Forest, the name of one of the main gods in Maori cosmology. It is hard to describe how insignificant one feels when standing below these giants. 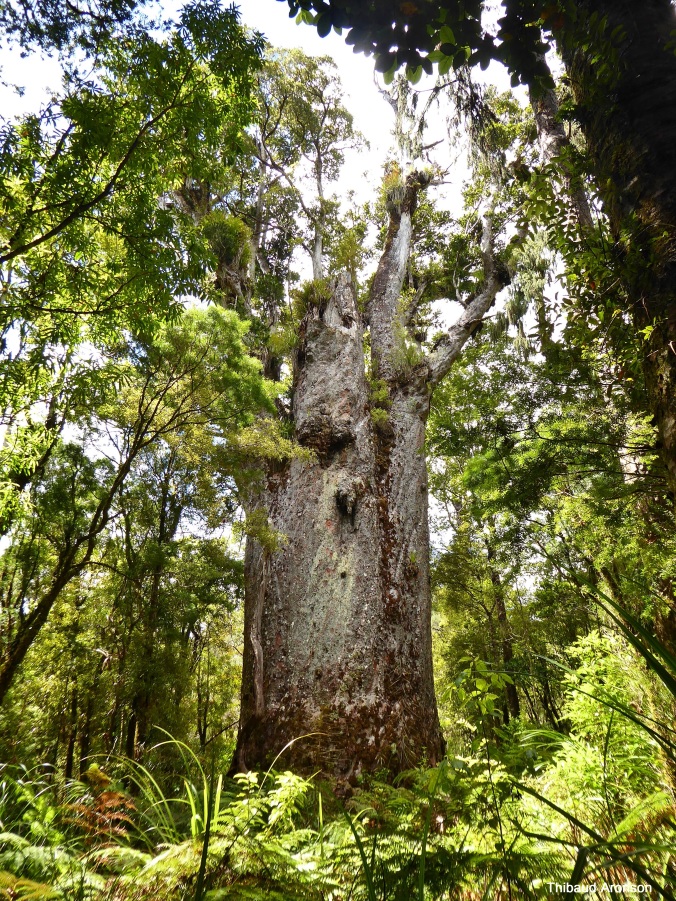 Te Matua Nhgahere (Father of the Forest), the oldest and second-largest remaining kauri in New Zealand. The age of this tree is variously estimated to be between 1200 and more than 3000 years old. Such longevity is exceedingly rare in tropical or subtropical rainforest trees.

The kauri also happen to yield excellent timber, once particularly valued for ship-building. Their logging was only banned in 1972, and less than 4% of the original kauri forests are left today. Happily, no native forest can be legally logged anywhere in New Zealand today, thanks to an election promise of the Labour government which passed into law in 2002.

Waipoua forest, on the north-west coast of the North Island, is the largest kauri forest left in New Zealand. Great efforts are being made today to preserve the remaining stands, particularly focusing on halting the spread of kauri dieback disease, a horrific, recently-arrived fungus-born infection that spreads through soils and kills every kauri tree it infects. Part of the campaign to save the tree entails education and consciousness-raising among all visitors to the kauri forests as to the importance of cleaning their shoes and boots both when entering and leaving the area.

Skeleton of a kauri killed by the dieback disease in Waipoua forest. Can the disease be stopped?

Some forest areas have fared better, such as the Nothofagus forests of Fiordland National Park, in the south-west of the South Island, well protected as they are by billions of biting flies, which have successfully prevented any significant human settlement in the area. However, stoats, rats and possums are not so easily deterred, and the whole area is a prime example of empty forest syndrome.

Therefore, enormous amounts of money are being spent on large-scale trapping and poisoning throughout the country, to try and control these non-native pests which wreak havoc both on native fauna and flora. For instance, we visited the private Pupu Rangi Sanctuary, 100 hectares of forest south of Waipoua, in the North Island. Its owner, Octavian Grigoriu, and a diverse team of volunteers work tirelessly in the forests, maintaining traps and poisoned bait around the whole perimeter of the forest, and deep in the bush as well. Octavian hosts paying guests, which helps pay for the expensive traps and poison. As a result, native species, including the North Island brown kiwi, are doing significantly better than in the nearby Waipoua forest, which is much larger, and therefore exponentially harder to protect effectively.

In sum, all over New Zealand, many initiatives, both top-down and bottom-up, are doing excellent work, which we will discuss in our second blog post.

One thought on “What’s going on in the Land of the Long White Cloud?”