James and Thibaud Aronson made a stop in Hong Kong recently, and post a report on what’s going on restoration-wise at the 60-year old Kadoorie Farm and Botanic Gardens.

After three weeks in New Zealand – about which we will report in our next two posts – we stopped recently in Hong Kong to visit the Kadoorie Farm and Botanic Garden (KFBG), which has just celebrated its 60th anniversary. Most visitors to Hong Kong never leave the city center, which has the second highest concentration of skyscrapers in the world and rivals London and New York for shopping, but also as a global hub for finance, trading, and marketing. But, we were lucky: through our friend Kingsley Dixon we had an introduction to Dr. Gunter Fischer, Head of the Flora Conservation Department at KFBG. Dr. Fischer came to Hong Kong from Austria, 7 years ago, and now oversees the vast – and gorgeous – botanic garden, the herbarium, the genetic and ecology laboratories and the various restoration and native plant recovery programs at the KFBG, which is the result of an exemplary public sector-private sector partnership. Behind the scenes, a key component is the large on-site tree nursery and enormous amounts of effort devoted to seed collecting and plantations of mother plant collections of rare native tree species for seed production. “In a changing world, resilience comes from diversity”, as Gunter so nicely puts it. 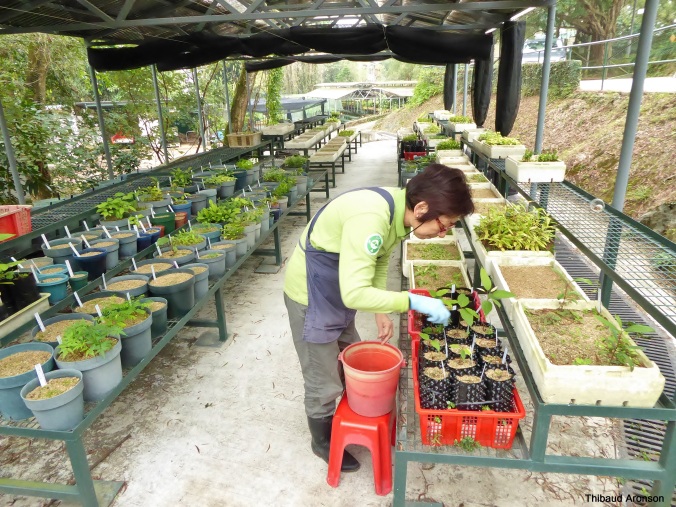 Ms. Chung Yick Kwan, an employee of the garden working in the KFBG tree nursery, handling one of the many rare native species propagated here.

Other departments at KFBG include the Sustainable Living and Agriculture, Fauna Conservation, Kadoorie Conservation China, and Education. Activities are devoted to developing and demonstrating sustainable small-scale farming methods for food production in South China, including new methods such as permaculture and traditional Chinese methods that have been lost or abandoned during the Chinese cultural revolution. There is also an extensive rehabilitation program for wild animals, notably many rare and endangered turtles, mammals, and birds that were seized by Hong Kong customs or delivered by animal rescue organizations.

All of these activities stem naturally from the original raison d’être of the organization. When Sir Horace and his brother Lord Lawrence Kadoorie founded the Farm 60 years ago, their goal was to help Chinese immigrants get established as small farmers. 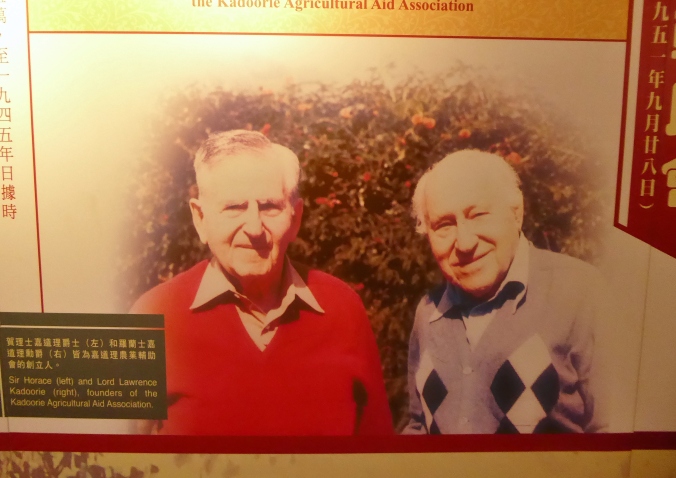 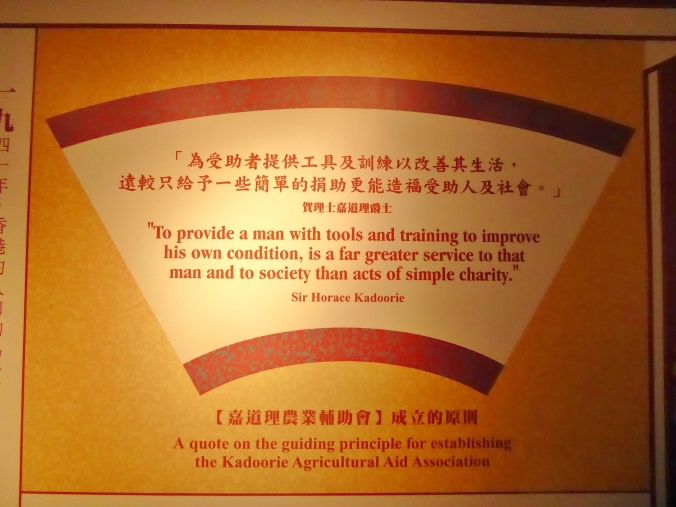 Text of one of the guiding principles of the charity work of KFBG in the early 1950s, which is still valid in the 21st century (NB. In the 1950s KFBG was called KAAA, Kadoorie Agricultural Aid Association). (Photo: KFBG archives)

To this day, the Kadoorie Foundation is the main funding source of the KFBG. But with vastly greater affluence in Hong Kong today, since the mid-1990s, a decision was made to transform the property into a world-class education and conservation center with a botanic garden at its heart. The conservation work comprises numerous projects in Hong Kong and mainland China but also parts of Southeast Asia, such as poorly explored regions of Laos and Cambodia.

Originally, Hong Kong was covered in tropical and subtropical forest, but it was completely deforested after the British took over in 1841; visitors in the 19th and early 20th century called Hong Kong a “barren rock”. As a result of centuries of cultivation with crops such as rice and tea, and ongoing urbanization in combination with more and more exhausted soils, many mountain slopes were left to their fate, completely denuded of any vegetation ongoing soil erosion, and high run-off during the annual monsoon seasons caused landslides and wreaked havoc.

Starting in the 1880s, successive governments undertook massive afforestation programs, as documented by the eminent ecologist Richard Corlett. However, during the World War II Japanese occupation of Hong Kong, most of the recently recovered forests were burned or devastated by harvesting of fuel wood.

After WWII, secondary forests began to recover, but of the 450 native tree species, only ca. 100 regenerated naturally, and the other species carry on sadly towards extinction. Moreover, there are huge problems with introduced grasses, many of which carry fire far better than anyone would like. 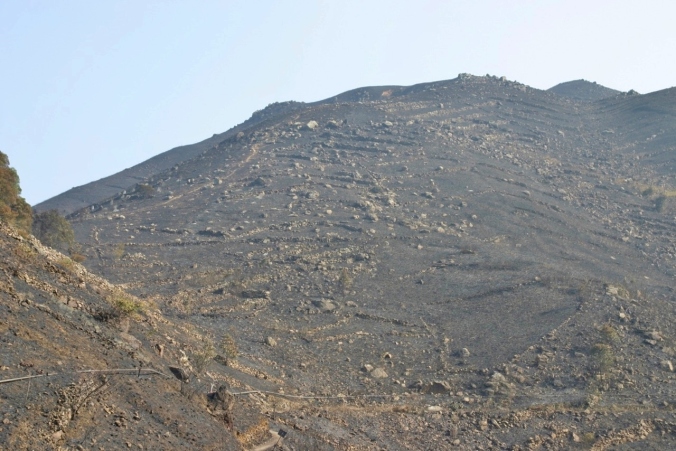 Thus the challenges for conservation and restoration are enormous. Indeed, the same is true at the regional scale. As Gunter told us, “most of the forests of South China have been trashed”; only tiny fragments of primary forest remain, and very little work on restoration of the original forest is going on. Since he arrived at KFBG, over 6 years ago, Gunter has done remarkable things in the botanic garden portion of the 159 hectare property, located on a steep slope of Tai Mo Shan, the highest point in Hong Kong (957 m or 3140 ft), including the launch of an ambitious restoration program on the recovering wilderness portion of the property that few visitors see. Rather than full coverage, a tree island, or assisted nucleation approach is taken, similar to that used in on-going experiments in Costa Rica, which Leighton Reid posted on last November.

The focus is largely scientific and conservation-oriented, given that most of the flora of Hong Kong is highly endangered. However, horticulture and arboriculture are as important as ecology here, Gunter assures us – an observation that jives well with the Missouri Botanical Garden’s approach to restoration as well. For example, Gunter and his colleagues not only plant ten thousand trees on average each year, all produced in the experimental KFBG nursery, they also prune and shape the trees they’ve planted to encourage upward growth rather than low shrubby formatting, which is what often happens with many trees after planting.

A large proportion of the tree planting budget is devoted to plastic cylinders (tree guards/shelters) to protect tree saplings from barking deer and wild boar, but also from harsh climatic conditions. 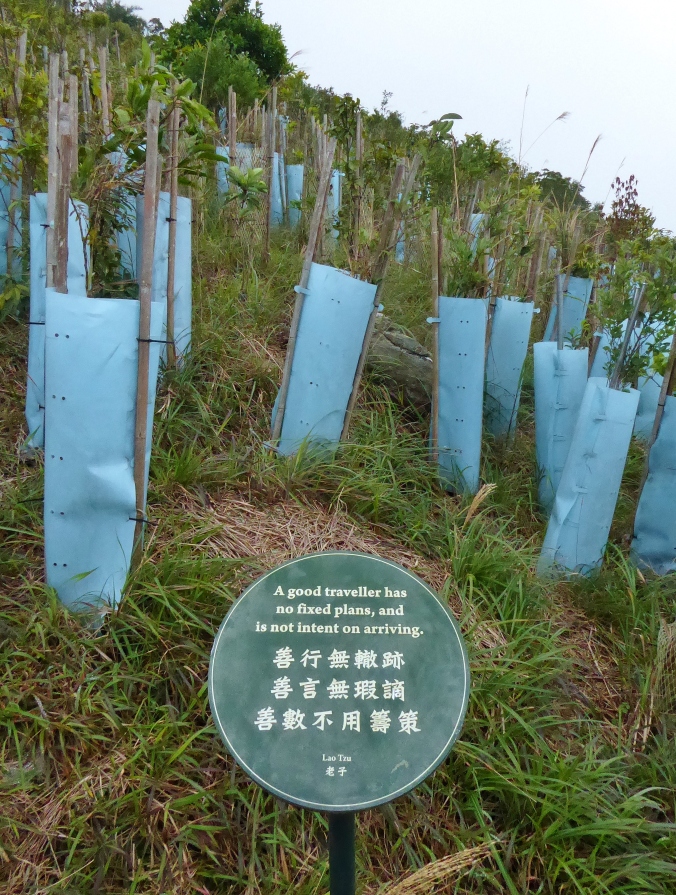 Tree guards used to protect seedlings on a ridge from strong desiccating winds.

The KFBG restoration team also makes a big effort to study soil improvement techniques that will compensate for degraded soils and improve survival and early growth of the planted trees. One of the most interesting components of this experimental work concerns the use of Biochar prepared on site, by slowly heating wood in closed containers with almost no air. Much of the wood comes from stems and trunks of intentionally introduced and now invasive fast-growing trees, such as the appropriately named Acacia confusa, that are gradually being removed from the property. This approach to invasive woody weeds has great potential in many parts of the world and should receive a lot more attention and investment.

Invasive trees and those deemed hazardous to human safety are continuously removed and replaced with native species. The wood is used to prepare biochar.

Clearly, KFBG is one of the bright spots of plant and animal conservation, and ecological restoration in Asia today.

For more information, see the recent article published by Gunter and his colleague Jinlong Zhang. Also, if you’re travelling to Hong Kong, be sure to stop by. Even if you don’t trek to the higher slopes to see restoration work-in-progress, the Botanic Garden is also full of interesting natural and cultural sights and stories too, such as these elevated pigeon hotels. And how many botanical gardens occasionally have to close a road because a massive python is stretched right across it, digesting a deer for a week! 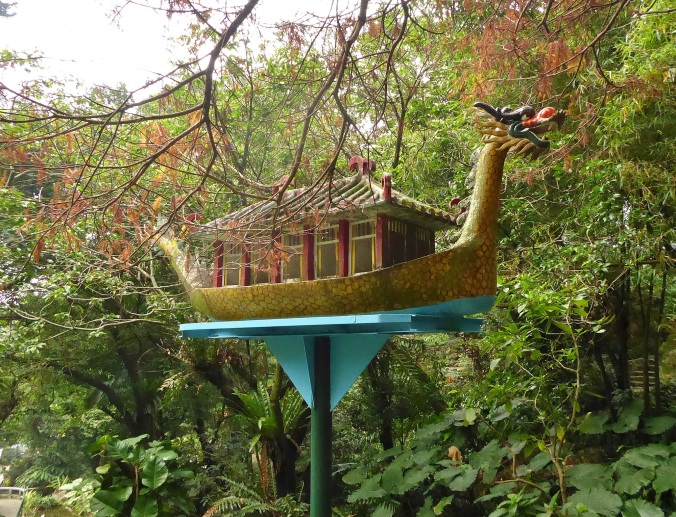 And there is the museum, theme gardens such as the Gloria Barretto orchid sanctuary, and lush forest gardens that appear to be native forest fragments but in fact are tropical gardens providing an exhilarating experience for thousands of visitors each month just a few miles from downtown Hong Kong. 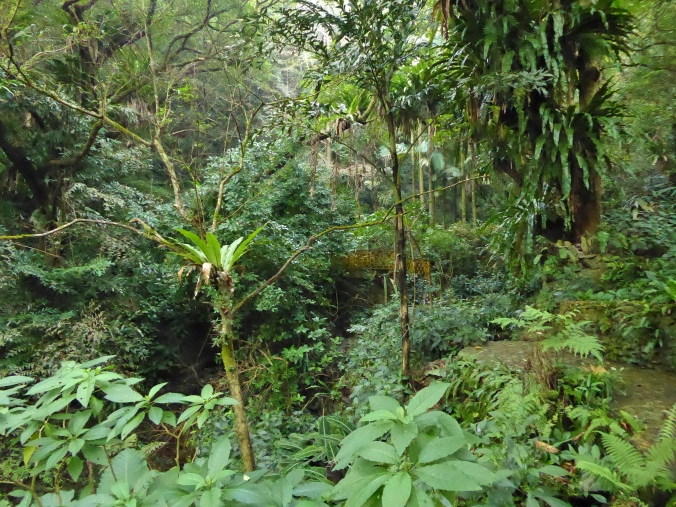