James and Thibaud Aronson report from coastal Peru, where they travelled in December, with Oliver Whaley, of RBG Kew.

Yesterday, at our local market here in France, we saw Peruvian avocados. We’d seen them there before, and we don’t buy them. But we’d never really given them more than a passing thought. Now, having come back from coastal Peru, where they are grown, we have a very different outlook.

Passing through much of Peru’s southern coast is perhaps more interesting to geologists than ecologists. The tenuous ecological balance, and its rather checkered history since humans arrived, needs time to reveal its secrets. But the earth’s surface here is simply naked and laid out as for a desert geomorphology text book. An extension of the famous Atacama desert of northern Chile, it is one of the driest places on Earth, with an average annual rainfall of 0.3 mm, or barely more than one tenth of an inch.

Here more than in nearly any other desert, life is almost entirely confined to areas with some amount of moisture. As a result, the few river valleys that come down from the Andes form spectacular green ribbons among the dunes. They carry some water down from the rainstorms high in the mountains but the critical driver here is El Niño. It brings down tremendous amounts of water and sediment once every 6 to 15 years, thereby rejuvenating the whole system, and generating extremely fertile alluvial soils.

500 years ago, the river valleys were occupied by dense woodlands or veritable forests of Prosopis limensis (local name – Huarango), which is often misidentified as Prosopis pallida, teeming with wildlife in the canopy and understories. Today, most of the Prosopis are gone, the excellent charcoal produced from their wood having been used up to fuel the stream engines of the now defunct coastal railway and, more recently, for fast food chicken restaurants ‘pollo a la brasa’ and millions of barbecue fires in cities and roadside restaurants. Instead, one now sees vast monocultures of asparagus, avocadoes, and table grapes, producing cash crops for the North American and European export markets.

This story of deforestation is in fact almost complete, with nearly 99% of the original vegetation having been removed. 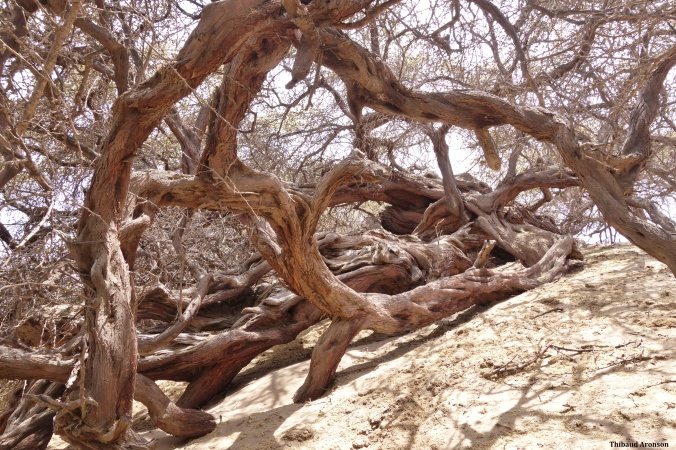 There once were countless Prosopis trees such as this one, which has probably lived for a thousand years on this sand dune, near Copara.

Most of them fell to the charcoal burners’ axes, and even though it is now forbidden to harvest firewood from live trees, illegal cutting continues, as seen here, 20 meters from the tree pictured above.

Depressing? Yes, but as engaged ecologists, we were also encouraged that change is happening; there is cause for hope. There are program in community-based restoration led by Ecoan underway in the high Andes, near Cuzco and environs, and science and conservation efforts underway at the Missouri Botanical Garden’s station at Oxapampa.

We were lucky to spend 10 days with Oliver Whaley, from RBG Kew, who has been instrumental in many of the first initiatives attempting to reverse some of the damage done on this arid coast and to find a new path that explicitly includes restoration. Particularly noteworthy is a partnership he’s brokered with the large agroindustry supply chain, including a giant supermarket chain where almost half of the UK buys its vegetables, and which is the destination of a high percentage of the region’s produce.

The agro-industries overcome the lack of reliable rainwater by installing intensive irrigation systems, which although highly efficient, are driving unsustainable expansion even as they produce spectacular crop harvests.

However, the coast also experiences strong winds coming from the coast year-round, which require that rows of trees be planted as windbreaks to shield the valuable crops. Furthermore security hedging today is almost entirely composed of introduced water-guzzling African or Asian exotics. Under Whaley’s in-farm reforestation  program, some producers have begun planting native Prosopis, Parkinsonia, and Acacia trees yielding a mixed forest instead, which provides habitat for wildlife and also improves the neighboring soils through their capacity to fix atmospheric nitrogen in symbiosis with rhizobacteria. They require far less water than introduced trees, and will never become weeds. Agroindustry management has also donated land for restoration corridors, a vitally important undertaking at the landscape scale that has not yet been well-explored in coastal Peru or other drylands.

The Kew Peru team planted 7,000 trees and shrubs of 15 native species derived from the degraded tiny relicts. The results have been nothing short of astounding, with over 70 new native plant species, 45 bird species, various lizards, desert fox and wild guinea pigs recolonizing areas that were nothing but barren soil 9 years ago. (The full results of this work will be published in the spring). Whaley takes a practical and patient view – whereby to nurture back woodland and a cultural re engagement with what nature provides takes time and needs to show results.

A patch of restored land on the edge of an asparagus field, showing the difference 10 years make. Santiago de Ica, southern Peru.

Whaley and the local NGO, Conservamos por Naturaleza that he helped found and works closely with, is also committed to education and communication, working in Ica, Nasca, and elsewhere, to change people’s perception of the key desert plants such as Prosopis and Capparis, and their ecosystems, and of native biodiversity in general. Cultural reengagement, he argues, is about changing perception from symbols of a rural, backwards environment to be left behind in the wake of progress, to highly useful and valuable trees and woodlands that are part of the local heritage. These ecosystems clearly are worthy of pride, not only for their inherent value, but also because they offer the prospects of  sustainable, profitable agriculture that is also conservation-friendly.

The Huarango Festival in Ica, which focuses on the numerous products that can be extracted from the tree, such as algarrobina, a sweet spread, a sweet drink, high quality honey, ink, and more has been a large success, and is now in its eleventh year. Whaley also works with schools, working to restore small patches of native vegetation inside the school compounds and promoting ecological consciousness through small nurseries and gardening projects. 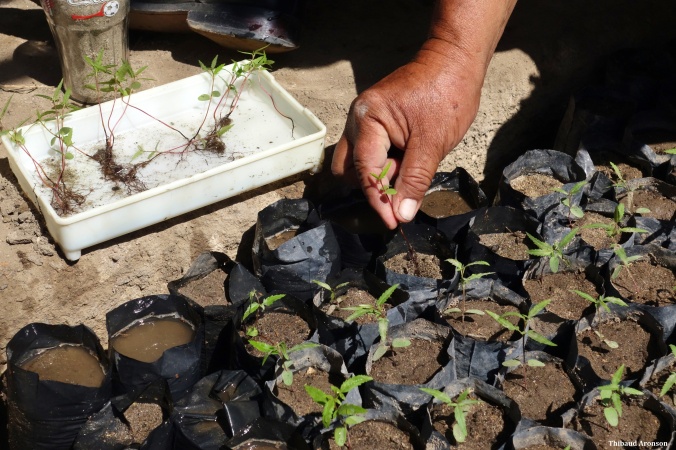 Seedlings in a native species nursery funded by the Royal Botanic Gardens, Kew, at the Faculty of Agronomy at the University of Ica. 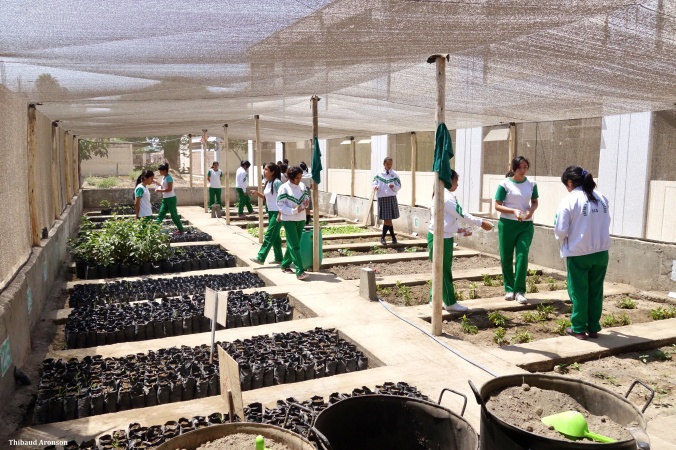 Middle school students in their school’s nursery, in a town near Ica, where they grow native species and food crops and have a great time doing it.

The other unique feature of the southern coast is an inland archipelago of sorts, made up of coastal fog oases, or lomas, in Spanish. Fed by the moisture provided by coastal fogs, they rise from the surrounding desert and harbor herbaceous vegetation and in some cases various kinds of trees, all of which show high rates of endemism. Most of the lomas are sadly threatened by mining and other uses today, but Whaley has already succeeded in helping protect the new national reserve of Lomas San Fernando. This and other efforts , such as drone surveys and modelling, are conducted with help from Kew GIS staff, and Whaley’s team in Peru that includes Alfonso Orellana, Consuelo Borda, Ana Juarez and other dedicated workers. They are currently doing the baseline research in two other lomas reserves to help strengthen the case for protected area status. 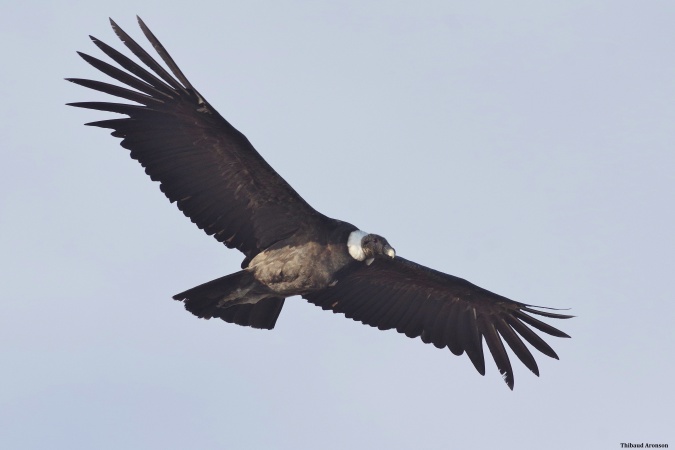 A female Andean condor (Vultur gryphus), in the Lomas de San Fernando reserve, the only place in Peru where this raptor roosts near sea level.

Whaley and his co-workers are also engaged in restoration efforts the tropical northern coast of Peru, where the circumstances are rather different. The north coast receives significantly more rainfall than the south, i.e., about 100 mm per year (!), that is 4 inches. This permits the vegetation to climb out of the river valleys, and in fact, the local Algarrobo (Prosopis pallida and in the extreme North only P. juliflora along with hybrids between the two), and Capparis species, among others, still form true woodlands. Traditionally, the trees were preserved by the local people as their leaves and in particular their pods are remarkably nutritive, and provide prime forage for free-ranging cattle, the peoples’ primary source of income.

The Algarrobo trees have been preserved in large part because they provide excellent forage for the local people’s cattle.

However, a still poorly understood plague, apparently resulting from the combination of a small fly and a fungus, are decimating the woodlands; in some areas over 80% of the Algarrobo have apparently died. Just like in the South, El Niño is paramount in keeping the system healthy and, in particular, no Prosopis seedlings have been seen germinating in the last 50 years, except during El Niño years. What’s more, the next El Niño event is overdue: the last one came in 1997/1998, and now the system appears exhausted. Clearly the system is waiting for the next El Niño, and the long wait appears to have increased the Algarrobo’s vulnerability to the plague.

However, El Niño is coming this year, and according to the climate experts, it’s going to be a big one. As a result, Whaley and his team are scrambling to prepare as many Prosopis seeds as possible, to be sown during or right after the heavy rains. As the trees slowly dying from the plague usually fail to set seed, Whaley and his collaborators fear that much of the soil seed bank is exhausted and this could truly be the last chance for this species in its wild state. 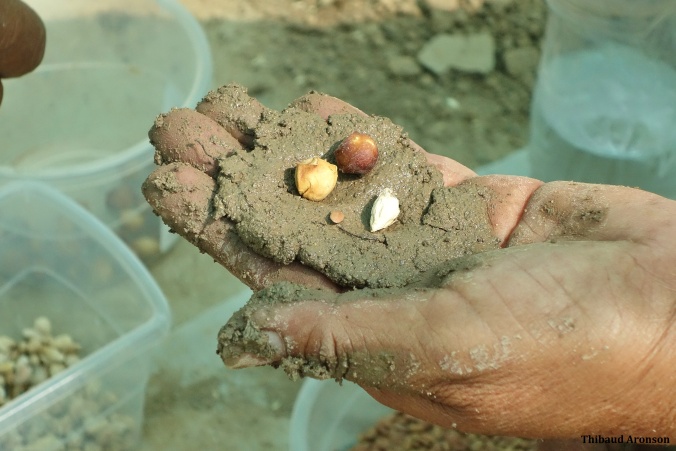 A seed-ball with 4 native species, including Algarrobo, being prepared at a community nursery, near Salas, Lambayeque region.

Now there is an additional layer to the issue, which asks of would-be restorationists exactly what it is that they are trying to do. There hasn’t been nearly as much deforestation in Peru’s North coast as in the South, so there are still reasonably large tracts of native vegetation left intact. Further, apart from Algarrobo, none of the other five dominant native tree species, including two species of Capparis,  appear to be affected in any way by the plague.  Domestic cattle will also eat the leaves of these other trees and shrubs, though they aren’t quite as good as the Prosopis.

Therefore, some might say that this is just a natural transition occurring within an ecosystem, and it would be foolish, or even a case of trying to play God, to attempt to save the Prosopis at all costs. However, Whaley thinks differently, and we agree with him. The Algarrobo, like the Huarango, is a remarkable tree, fantastically well adapted to its environment, capable of living 1000 years of more, and clearly the keystone species of the riparian and related ecosystems where it occurs.

It forms remarkable canopies, and in areas where it is absent, we did not see the other tree species present produce anything like it, rather forming a much more open low savanna. Further, it has been a pillar of the various civilizations that have existed in the area for the last 4000 years. Therefore, Whaley is not yet ready to just let it go…

A thousand-year old Prosopis pallida in the Pomac Forest Sanctuary, possibly the oldest of its kind still alive in northern Peru…

5 thoughts on “The Huarango and Algarrobo forests of coastal Peru: rays of hope”