This post was co-written by Leighton Reid and Chris Birkinshaw after a three-day field trip in the tampoketsa with Cyprien Mandriamanana and Jeannie Raharimampionona.

A narrow, paved road winds north from Antananarivo through a high, windswept plain. It is the wet season, and the hills are green and close-cropped, but in the long dry season the landscape burns black. Orange rivers wind through the valleys, muddied by massive erosion. Here and there are thin strips of riparian forest, chock full of endemic species.

The biggest chunk of remaining forest is Ambohitantely, Malagasy for “hill of honey”. Ambohitantely encompasses 1,800 ha of humid forest (about three times the size of Saint Louis’s Forest Park). We visited the reserve to observe natural forest recovery in one of the few places it can still be seen on Madagascar’s Central Highlands.

Ambohitantely: the last large tract of forest on Madagascar’s Central Highlands. Ten kilometers to the northwest is Ankafobe, a much smaller forest fragment managed by a local community with assistance from Missouri Botanical Garden.

Why is forest recovery so rare in the Malagasy highlands? Madagascar’s Central Highlands are currently undergoing a complete ecological transition, from forest and wooded savanna to grassland. The degradation cycle often starts when people cut forest trees to extract wood for timber and charcoal production. Small-scale cutting opens the canopy, dries the forest floor, and creates debris, all of which increase forest vulnerability to annual wildfires that sweep across the grasslands during the eight month dry season. C4 grasses quickly colonize the burned land, inhibiting forest recovery, and creating ideal conditions for future fires. The reason that Ambohitantely has natural forest recovery for us to observe is because reserve staff maintain a wide fire break for more than thirty kilometers around the reserve.

Our guide at Ambohitantely took us on a hike through several areas where forest had once been cleared and burned but where fire had been excluded for 15 or 25 years, allowing the forest to begin to recover. Frankly, the vegetation was uninspiring. Low shrubs and forbs were scattered through a matrix of C4 grass (mostly Aristida), but trees and tree seedlings were nowhere to be seen outside of the forest (where they were abundant). By tropical forest standards, this looked slow. But for natural forest recovery on the Central Highlands, it’s hard to imagine a better situation than being protected from fire and immediately adjacent to the largest remaining tract of forest. 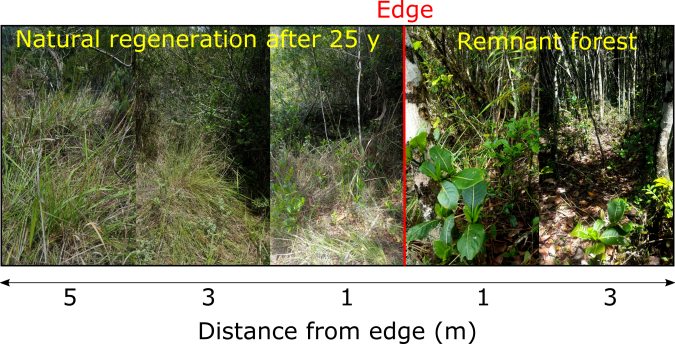 After 25 years of recovery, forest edges were sharp. Tree seedlings were almost totally restricted to forest, and grasses dominated the ground layer just outside.

Our main interest in Ambohitantely was to compare natural forest recovery there to our observations at another forest fragment, Ankafobe, 10 km northwest. For the last decade, MBG has partnered with a local community to preserve a thin, riparian forest containing several critically endangered plant species. Community members constructed a fire break and have begun to restore the surrounding hillsides by turning over the orange clay and planting fast-growing legumes to develop the soil.

A degraded hillside at Ankafobe; the remnant forest is down the hill to the right, near the edge of the photo. The tree at the top of the hill is Schizolaena tampoketsana, a critically endangered microendemic in an endemic Malagasy plant family (Sarcolaenaceae). It is a remnant forest tree that likely escaped repeated fires by being nestled in a deep, protective gully. The multi-stemmed shrub in the foreground is actually a large tree species, Brexia montana, which has likely resprouted many times from a well-developed root system.

Some of our comparative observations were promising. We were happy to find examples at Ambohitantely where recovering land dominated by heather and blueberry seemed to have continued developing into a more diverse thicket, including Nuxia capitata, Psiadia altissima, and Razafimandimbisonia minor. At Ankafobe, we had worried that the heather growing in some areas signified poor soil conditions and possibly arrested development.

Overall our visit left us with more questions than answers. We hope to answer at least a couple of them over the coming years. 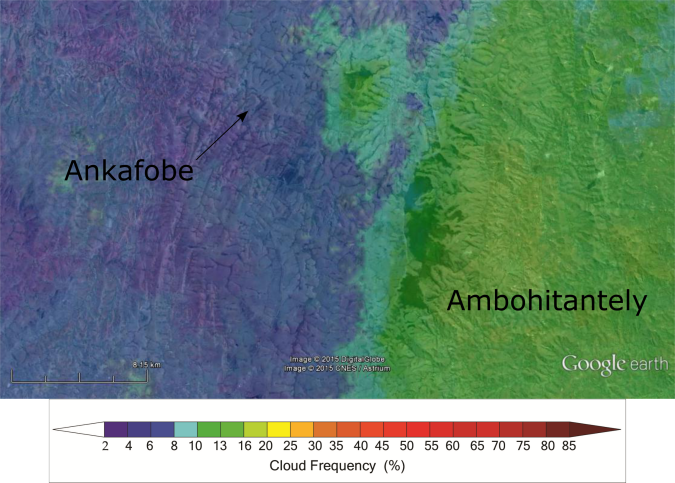 Although Ambohitantely is the only remnant forest fragment of any size, we learned recently that it may not be a perfect reference system for Ankafobe. For one thing, Ambohitantely is slightly higher and farther east, which results in considerably greater cloud cover during the dry season. This probably ameliorates the harsh conditions outside of the forest, at least a little. Shown here is cloud frequency from May – October, taken from NOAA MODIS satellite imagery. Thanks, Michael Douglas!

1Two datasets (one from our team and one from Pareliussen et al’s [2006]) suggest that NPK fertilizer, even in relatively small doses, reduces native tree seedling performance. It is unclear whether this is because of toxicity (a direct effect) or because other plants, like shrubs, are better able to utilize the nutrient pulse and then compete more strongly against the native tree seedlings (an indirect effect).